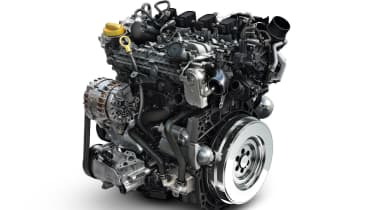 The new unit has been developed in partnership with the Renault-Nissan-Mitsubishi Alliance and Daimler, and is on sale now in those two models in Europe, while the fresh engine will make its way into other Renault badged cars progressively over time.

The 1.3-litre direct injection four-cylinder engine starts off with 113bhp, with 138bhp and 158bhp variants also on offer. Torque ranges between 220Nm and 270Nm with maximum torque output achieved between 1,500rpm and 3,500rpm. The 113bhp model only comes with a six-speed manual gearbox but the higher output models can be specced with a seven-speed EDC transmission.

Renault had plenty of options and existing cars to obtain technology from thanks to the Alliance and its partnership with Daimler. The Nissan GT-R supercar is said to have helped in the development of the new powertrain, as the GT-R’s engine coating technology was also utilised on the new 1.3-litre Scenic powertrain.

Daimler oversaw the engine’s quality standards along with the Alliance, which conducted 40,000 hours of testing with the new 1.3-litre engine. It’s manufactured at Renault’s Spanish factory in Valladolid

Both the Scenic and Grand Scenic benefit from improved fuel economy, with the 113bhp and 138bhp engines achieving 52.2mpg (50.4mpg for the Grand Scenic) and 122g/km of CO2 emissions.

Would the 158bhp engine work in a new hot Twingo? Tell us your thoughts in the comments below!