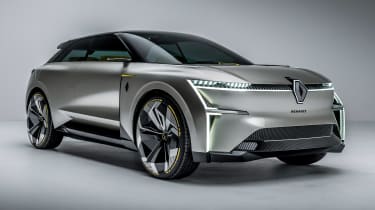 This is the Renault Morphoz concept: an electric concept car that features an extending wheelbase and clever battery swap technology.

In reality, the Morphoz previews the maker’s new scalable electric CMF-EV platform, due to reach production by 2022. The architecture will spawn at least two pure-electric models, including a Volkswagen Golf-sized family car with a 342-mile range.

However, the idea behind the Morphoz is a set-up that allows users to temporarily extend the physical size of the car as well as its electric range and power by adding extra batteries. 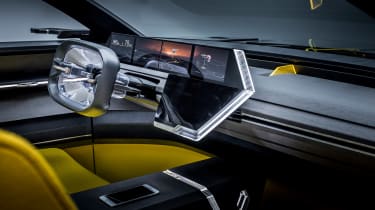 The installation process takes a matter of minutes, says Renault; the wheelbase extends to reveal extra cell storage beneath the car, before the batteries are inserted into the car’s floor pan. Parts of the bodywork are designed to hinge or flex, allowing the car’s various panels to extend or retract at the touch of a button.

In its shorter ‘City’ setting, the Morphoz features a 40kWh battery and measures 4.4m in length. Renault claims it is perfect for urban life, thanks to its reduced footprint and 249-mile electric range. The ‘Travel’ version lengthens the car to 4.8m, which creates space for an additional 50kWh battery – creating a usable range of 435 miles.

Gilles Normand, Groupe Renault’s senior vice president for electric vehicles and mobility services told Auto Express: “The platform is modular and flexible and can be used for several applications. It will allow us [to have] two cars to sit above ZOE,” he said. “The [CMF-EV] is a platform that can accommodate different batteries; thin batteries or tall batteries – for crossovers or sedans. The capability of EV means it has the ability to go to every segment.”

Normand confirmed that with the rate at which battery technology is progressing, these models would launch with a range of “more than [342 miles] and high charging capability”. He insisted Renault’s upcoming electric cars would utilise 150kW charging, which is capable of adding 93 miles of range in around 15 minutes. 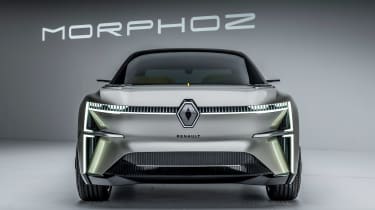 The Morphoz takes the form of a Renault Kadjar-sized coupe SUV, but with interior space more closely aligned with cars from the class above. The concept is four-seat only, but it’s likely a production version would feature a more conventional rear bench.

By increasing the distance between the front and rear wheels, the transformation from ‘City’ to ‘Travel’ also unlocks extra cabin and boot space. The interior can be reconfigured, with the front passenger seat able to pivot at the H-point – allowing occupants to sit facing forwards or rearwards depending on preference.

The Morphoz also features a sustainable interior; the floor is made from recycled yoghurt pots, while the dashboard is made from wood. There is a 10.2-inch central display, plus an additional screen in the centre console for rear-seat passengers. Artificial intelligence is also used to recognise the driver, unlock the doors, and automatically positioning the seat to the preferred position.

When not being used to drive the car, Renault claims the Morphoz’s batteries can power appliances in the user’s house, or transfer charge back to the grid via V2G (vehicle to grid) technology. Morphoz also features Level 3 autonomous features, which Renault claims can remove the human error behind almost 90 per cent of road accidents.

Do you think the new Renault Morphoz concept is a good idea? Let us know your thoughts below...