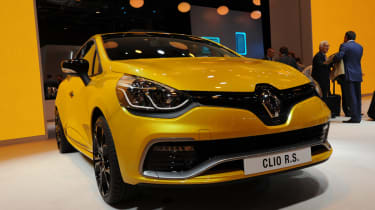 Renault has used its home motor show to officially unveil the latest version of its RenaultSport Clio hot hatch.

The big news is that it will be fitted with a smaller 1.6-litre turbocharged engine, rather than the naturally aspirated 2.0-litre of the current car. Due to the addition of the turbocharger, power remains at 200bhp while torque has been upped to 240Nm from the current 215Nm. The smaller engine also means a 25 per cent reduction in CO2 emissions.

A more controversial change is the decision to drop the six-speed manual gearbox of the current car and replace it with six-speed dual-clutch transmission. That blow will be softened a little by the news that all cars will come with steering wheel mounted paddles for manual gear changes.

The raw, unfussy nature of the current car appears to have been updated for a more technological approach. This new car comes with a choice of ‘Normal’, ‘Sport’ and ‘Race’ modes, which alter steering feel, throttle response and stability control settings. It is also fitted with a Launch Control function.

This approach has continued inside the car with the addition of a multimedia system, touchscreen sat nav, Bluetooth radio with USB connection and keyless entry and start.

Another new addition is the R-Sound Effect. Using Renault R-Link, it can simulate the sound of one of a range of iconic engines through the car’s speakers. Tuned to the speed and acceleration of the car, drivers can choose engine noise they want.

On the design front, the RenaultSport Clio gets LED daytime running lights, 17-inch alloys, new F1-inspired front and rear bumpers, along with a new grille and spoiler. The latest diffuser and spoiler generate 80 per cent and 20 per cent extra down force respectively, according to Renault.

Buyers will also get a chance to give their car a personal feel with the introduction of an interior and exterior personalisation programme. There’s a choice of four different themes to start. These can then be combined with different motifs and upgrade elements to create a unique car.