The Renault Clio Dynamique MediaNav gets alloy wheels, and sat-nav as standard 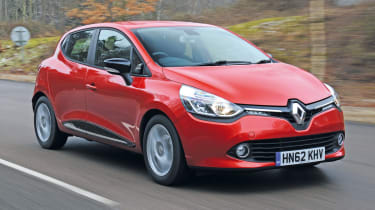 Despite its bold looks, the Renault Clio Dynamique MediaNav can't match the class leaders. It’s surprisingly fun to drive, but the cheaply trimmed interior already looks dated in some areas, despite having lots of kit. The engines are efficient but the petrols do feel a bit slow.

The Renault Clio Dynamique MediaNav sits above the Expression and Expression+ model comes with a choice of three engines - a 1.2-litre petrol, a 1.5-litre diesel or a small 898cc petrol unit. The 1.2-litre engine is the entry-level engine, as it's the slowest and returns just 51mpg, but it doest cost £1,000 less than the 898cc version, at £13,195.

The Renault Clio Dynamique MediaNav is available with stop-start tech, which boosts economy on the diesel model to 88mpg, a very impressive figure. The Dynamique MediaNav ECO model also boasts emissions of just 83g/km of CO2, so it's free to tax as well. The 898cc petrol ECO model doesn't miss out on that benefit, however, as it emits 99g/km of CO2 and returns 66mpg.

The Eco-spec Clio features taller gearing to peg emissions below the 100g/km CO2 barrier, but as a result it lacks pace and means you have to plan overtaking manoeuvres carefully. The engine also sounds strained at higher revs, and as a result the Renault isn’t as refined as its rivals on the motorway.

This lacklustre performance wouldn’t be such an issue if the car was much more efficient than the Ford Fiesta, but their official economy figures are identical, and although Renault offers cheaper servicing and a four-year warranty, the car won’t retain its value as well.

There is also a Renault Clio Dynamique S MediaNav model, which gets the 898cc petrol and 1.5-litre diesel and adds some extra standard equipment. 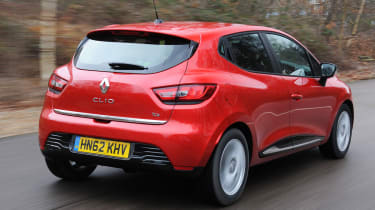 The new Renault Clio gets an oversized ‘lozenge’ badge and slender grille, as well as slick chrome details bright paint colours. The Dynamique model comes with a choice of black, white or chrome finishes for its 16-inch alloys, and certainly has plenty of kerb appeal. This Clio is only sold as a five-door, but rear door handles hidden in the C-pillars give it a coupe-like profile.

The stylish exterior builds a strong sense of anticipation for a high-quality cabin, but once you climb inside, the Clio starts to falter. This model comes with a seven-inch media screen in the centre console, while gadgets like Bluetooth and keyless entry and start are standard, but it feels a long way behind the class leaders for quality. The plastics on the door panels and dash are scratchy and hard to the touch, while the manual air-con dials and small vents in particular feel flimsy.

Plus, none of the gadgets can hide the fact that the car feels built down to a price – and the perceived quality of the dash isn’t the only issue with the interior. Even though the wheelbase is 100mm longer than the Ford Fiesta’s, the Renault has less space for rear passengers, with the low roofline, small side windows and high-mounted bench making it feel cramped. 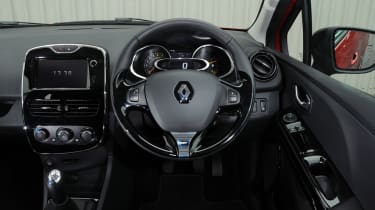 The glovebox is tiny, with barely enough room for the slim owner’s manual. Things improve in the boot, though, with a 1,146-litre maximum capacity when the rear bench is folded flat.

Under the skin is a modified version of the previous Clio’s platform, rather than an all-new chassis. The car is sharp enough to drive, thanks to its quick, accurate steering and low kerbweight, but the notchy five-speed gearbox and bouncy ride mean it’s not top of its class.