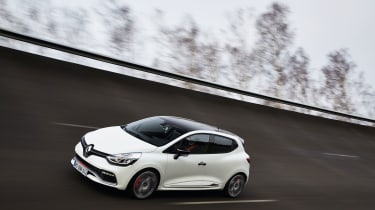 Renault has revealed the pricing and specification for the hotly anticipated Clio Renaultsport 220 Trophy. This is the new flagship model of the Clio range and will make its UK debut at the Goodwood Festival of Speed from June 25th-28th.

The Clio Renaultsport 220 Trophy will cost £21,780 and is aimed both at track-day enthusiasts and drivers seeking fiery hot hatch performance for road use. Orders books are open now with first UK deliveries to be expected in August.

The 10 per-cent power hike is a result of a larger turbocharger and revised mapping to the standard Renaultsport Clio 200 engine, boosting the output of the 1.6-litre direct-injection turbo engine by 20hp. Torque has increased by 8.5 per cent, meaning there's an extra 20Nm on offer. Total outputs therefore are 217hp and 260Nm, with a further 20Nm available through the 'Torque Boost' feature available in fourth and fifth gears. This puts the Clio 220 up with the hottest supermini-based hatchbacks around. 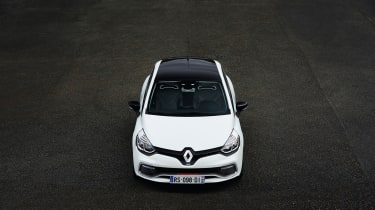 In conjunction with the larger turbocharger, a revised air intake and exhaust system have been installed to minimise back-pressure losses. Owners will be also be pleased that this is now a higher-revving version of the Clio as the rev limiter has been raised to 6,800rpm (300rpm more than the Clio 200).

Fuel economy is 47.9mpg on the combined cycle while emissions are at 135g/km. Stop&Start is also fitted but will be deactivated in Spot and Race modes. Those who will have experienced the dual-clutch gearbox will be pleased to know that the shifts are now 50 per cent faster whilst allowing greater flexibility in Sport mode for more comfortable urban driving. 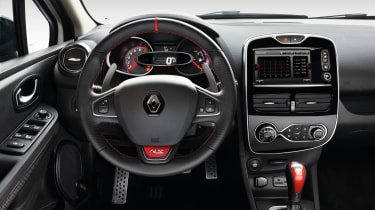 To compliment the more immediate and responsive gearbox, the steering-wheel-mounted paddles themselves have been revised with a 30 per-cent shorter travel.The combination of the higher rev limit and recalibrated software will allow for earlier down changes during heavy braking at the the track. The car of course maintains the R.S. Diff to maintain optimum levels of traction.

The 220 Trophy has been lowered by 20mm at the front and 10mm at the rear. As well as firmer dampers, the rear springs are now 40 per cent stiffer with motorsport-derived bump stops. 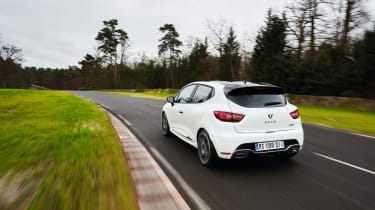 The steering has a 10 per cent faster rack, with Renaultsport engineers proclaiming this to be the best steering system on the market. Michelin Pilot Super Sport 205/40R18 tyres will be fitted on 18-inch 'Radical' wheels with black inserts and diamond-effect facings. Frost White will be an exclusive colour for the Clio Renaultsport 220 Trophy. This matt body colour is available with a gloss black roof and rear spoiler for £1300.

Standard Clio 200 models have also received minor updates, with the introduction of Stop&Start technology, an increase in torque to match the 220 Trophy, and improvements to fuel economy and CO2 emissions.

Now read our verdict on the best hot hatchbacks you can buy...