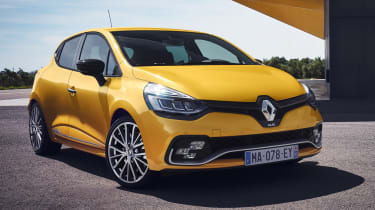 Renault has already shown us its new version of the Clio supermini, but now the covers have been taken off the Renaultsport version as well. The revised 2016 Renault Clio Renaultsport is set to go on sale in the autumn, with order books open from September 2016.

The new Renault Clio RS comes with a choice of power outputs and chassis options, although the six-speed EDC dual-clutch automatic gearbox is still the only choice of transmission.

The 1.6-litre turbocharged engine comes with 197bhp as standard, but if you go for the Trophy chassis option then you can also have it with 217bhp. The Trophy chassis gets 18-inch wheels, lowered suspension (by 20mm at the front and 10mm at the rear) and a new Akrapovič exhaust. 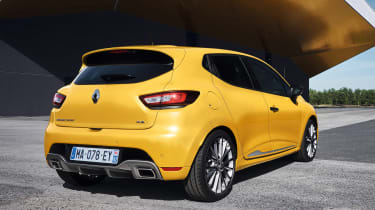 The other chassis options on the Clio Renaultsport are Sport and Cup. Sport is the standard car and gets 17- or 18-inch alloys, while the Cup version sits on 18s and has stiffer springs, a slightly lower ride height and a quicker steering rack.

The new Clio RS Trophy accelerates from 0-62mph in 6.6 seconds, thanks to a launch control system, and can hit a top speed of 146mph. There’s also a driving mode selector, so you can choose between Normal, Sport and Race modes while driving.

There’s a subtle new look for the new Renaultsport Clio as well, starting with some distinctive LED lights on the front bumper first seen on the extreme Clio R.S. 16 concept. The lights are in the shape of a Renaultsport motif called ‘R.S. Vision’, and are part of a new wider-looking bumper design. 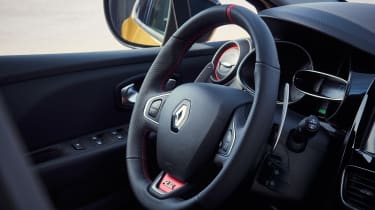 New alloy wheels, a twin-exit exhaust and a rear diffuser join the roof spoiler and C-shaped rear lights to continue the sporty look. There are some RS logos around the car, too.

Renault has also announced a new GT Line trim, which features the sporty looks of the Clio RS but without the hardcore attributes. There are bigger intakes on the front bumper, new alloys, a chrome tailpipe and a darker rear bumper panel.

Inside, the GT Line model gets a blue colour scheme and the same leather steering wheel from the RS, premium seats and aluminium pedals.

What do you think of the new-look Renault Clio Renaultsport? Let us know in the comments section below...