The 271bhp Renault Clio Renaultsport R.S.16's story is at an end, with Renault scrapping production plans 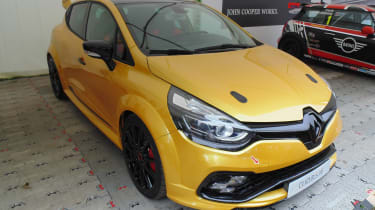 Renaultsport is celebrating its 40th birthday in 2016, and to mark the occasion the company revealed a new concept car designed to be the fastest Renault road car yet. The car was called the Clio R.S. 16, and there were many hints at a production version - but now the plans have been scrapped.

"The plant is also gearing up for the production of the Alpine and, it’s due to the focus on this, the eventual decision was made not to divert attention away to make some R.S.16s. The option of delaying the R.S.16 until after the start-up of Alpine was considered but this would have meant the first-half of 2018, too long for customers to wait."

The idea for the Renault Clio R.S. 16 was simple: take the engine and gearbox from a Megane Renaultsport 275 Trophy-R and fit it into the Clio’s body for the ultimate combination of low weight, compact size and high power. The R.S. 16 was named after the current Renault Formula 1 car, and shares its livery too - celebrating the brand’s return to F1 racing in 2016. 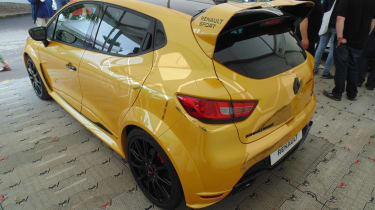 The project was in development for just five months, with the deadline set for the 2016 Monaco Grand Prix, where it was first unveiled, as the car is meant to provide a tangible link between Renaultsport’s F1 efforts and its road cars.

Previously, Auto Express had the chance to see the project first hand as it developed, with an introduction to the car at Renaultsport HQ in Les Ulis near Paris and a passenger ride at Renault’s test track in Aubevoye - and we were among the first in the world to drive the car at a private event near Paris.

Celebrating 40 years of Renault and the F1 return

Renaultsport boss Patrice Ratti gave us an overview of the Renault Clio R.S. 16 as it was being put together by engineers at the Renaultsport headquarters. “The idea was to celebrate our fortieth year, as well as our return to F1. A Clio RS fitted with our most powerful engine was an attractive proposition, and one that was technically possible” he told us.

The plan was to create the fastest road-going Renaultsport car ever, with the 271bhp 2.0-litre engine from the Megane RS put into the lighter Clio to create a car with a power-to-weight ratio of 221bhp per tonne. The gearbox replaces the Clio’s dual-clutch unit, which saves enough weight to offset the larger engine.

The codename for the project at this time was KZ01, standing for ‘crazy one’. Ratti, with the help of the team that worked on the car, walked us around the half-built prototype to show off the extent of the changes. It’s not just the engine that gets carried over from the Megane RS Trophy-R, but also the gearbox, brakes, 19-inch wheels, tyres and adjustable dampers. 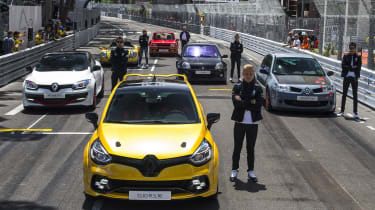 The Clio R.S. 16 is 60mm wider than a standard version to accommodate the new parts, and that means it gets wider arches and redesigned bumpers, too. Designer Eric Diemert also pointed out the F1-style livery, black badges, sporty rear diffuser and side skirts. “We wanted to keep a strong link with the Clio RS,” he said, “but the wheel arches and aero kit give you an idea of the lower stance.”

You’ll also have noticed the large rear wing, which is lifted from the Clio Cup race car. This compliments the rear suspension, which has been lifted from the Clio R3T rally car. “We tried to use as many existing parts as possible,” Ratti said, explaining that the very short development time forced some ingenuity from the team. Part of the subframe has even been taken from Renault’s Kangoo van, as it happened to be the best fit for the RS 16 - and part of the ECU software comes from a Dacia Sandero.

There are bespoke parts on the car, with adapter plates to link the mixed parts taken from the Clio and Megane, and a torque-resisting engine mount needed as well. The front air intakes have had to be redesigned as well to improve airflow. Adding 19-inch wheels means the arches needed reshaping too, and the bulging bodykit and RS logos on the front bumper are new for this car as well.

Only two Renault Clio RS 16s have been built 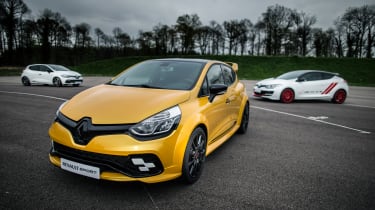 All of this development work went into two cars, one yellow show car that was revealed at the Monaco GP and one black prototype that, a few weeks later, we got the chance to ride along in during a test at Renault’s Aubevoye test track. There are only two cars that exist, with no production version.

Driver David Praschl took us out for a few high-speed laps, giving us a sense of the character of the R.S. 16. The first thing that strikes us is the noise - the exhaust is from “a future Renaultsport product”, likely the new Megane RS, and while the tone is recognisable from the current Megane it’s much louder and more aggressive in the concept Clio. 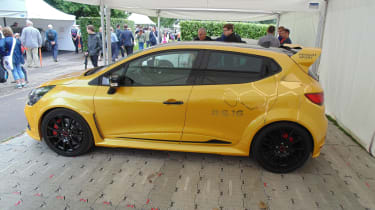 Acceleration felt very rapid, but it was the R.S. 16’s cornering ability that had us desperate to have a drive: it changes direction incredibly quickly, and does so without a hint of body roll. The short wheelbase and lively chassis mean it’s easy for Paschal to get the Clio sideways, but the oversteer doesn’t feel snappy.

What do you think of Renault’s craziest ever Clio? Let us know in the comments…