The new Renault Megane caused a stir at this year's Frankfurt Motor Show. Gone was the conservative exterior and interior styling of its predecessor, and in comes a daring new design. The new Megane is possibly the best looking car in its class but it's not just skin deep – the cabin is built well and features a Volvo XC90-style tablet touchscreen. On this first impressions, Renault has righted the wrongs of the old Megane and produced a very impressive family hatchback. The warm GT model lacks a little sparkle, though – hence a three-star rating – although we suspect standard model to get four stars.

Renault is undergoing a renaissance. The French brand’s reinvention started in 2012 with the curvy Clio that swept in with daring styling, the latest connectivity and a welcome boost in quality. It was followed by the Captur crossover, Twingo city car and, just this year, the Kadjar SUV. All Renault needed to complete the image overhaul was a new family hatchback – and this is it.

This new Megane IV, on sale next summer, aims to not only carry on the current revitalisation story, but also right the wrongs of the previous car. While its predecessor brought in welcome gains in interior fit and finish, the Megane III lost all the quirky styling cues Meganes in the past have been known for. 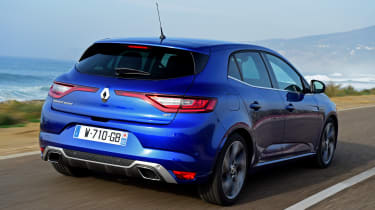 It’s for that very reason the new Megane is styled to stand out. It’s the widest car in its class and while that spells bad news for tight multi-storey car parking spaces, it means the new Megane has a very muscular stance. The large Renault diamond badge sits proudly, flanked by distinctive c-shaped LED day-running lights and, on our range-topping GT test car, full-LED headlights. Other GT styling additions include an upper and lower honeycomb grille, Renaultsport 18-inch alloys and a rear diffuser at the back.

In fact the back is almost as striking as the front with large rear lights that stretch and curl almost to the middle of the bootlid. The rear, just like the front-end, sits squat too thanks to that wide track. On our test route in southern Portugal the car turned a surprising number of heads, making us believe the new Megane is the benchmark for design in this segment – nudging a little ahead of the SEAT Leon and new Vauxhall Astra. 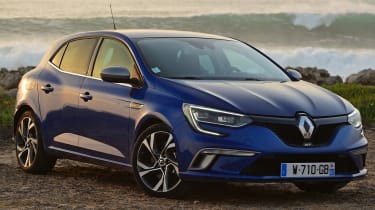 One of the most pleasing features of the new Kadjar SUV is the big improvement in interior quality. The Megane is just as satisfying with soft-touch plastics covering the upper part of the dash and the switchgear feels sturdy. There’s plenty of space in the back, too and the boot – at 434 litres – is larger than the Ford Focus, Vauxhall Astra, SEAT Leon and the Volkswagen Golf; although the Golf does have an extra 23 litres of space with the seats folded (1,270 litres versus 1,247) and all have better-shaped boots due the Megane's having a large lip.

Our Megane GT had a colour head-up display – a first in this segment – TFT dials in the instrument binnacle and an 8.7-inch portrait touchscreen featuring Renautlt’s R-LINK infotainment system. There were also a pair of part-leather and alcantara sports seats and plenty of Renaultsport badges dotted around the cabin. 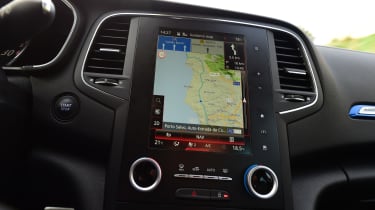 On first impressions, the touchscreen looks smart and makes other hatches, like the SEAT Leon for example, look dated. However, the system is illogically thought-out in places with various menus awkward to navigate and the touch-sensitive buttons being fiddly to press on the move. The plastic surrounding the screen also looks a little ugly and attracts fingerprints. That said, it is the first non-premium car to have such a large touchscreen and the Megane costs a fraction of the price of a Volvo XC90 and Tesla Model S – both of which have excellent tablet-like screens.

• Renault returns to Formula One

Renault has yet to confirm which engines or the trim levels it’ll be bringing to the UK, but on the continent there are four 1.2-litre petrols, two 1.5-litre diesels, two 1.6 diesels and a 1.6-litre turbo petrol. There will even be a 1.5-litre ‘mild hybrid’ diesel coming in 2017 which uses an F1-like KERS system to save and re-use energy recouped during coasting and braking. Virtually all engines will be on offer in the UK with the GT using a 163bhp 1.6 diesel and the 1.6-litre turbo petrol.

It’s the latter we got behind the wheel of, and while the on-paper figure of 202bhp doesn’t sound remarkable, on the road it gives more than reasonable performance. It’s the same engine you’ll find in the Renaultsport Clio 200 Turbo but with the Megane’s extra weight to carry, the GT is more of a ‘warm’ hatchback – you get the sense it’s been deliberately held back as not to rain on the parade of a future Megane RS. 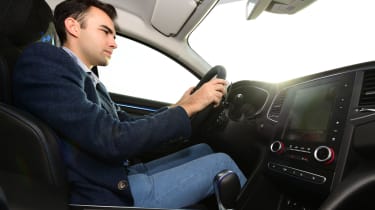 That said, there’s clever kit like launch control and Renaultsport’s engineers have been let loose on the GT – and it shows. The GT gets stiffer suspension and anti-roll bars than the standard Meganes, and the GT loves to be punted down a country lane.

It’s just a shame that the rest of the package falls short. The steering, while accurate, is oddly weighted and doesn’t offer enough feedback and the seven-speed dual-clutch gearbox (there’s no manual option in the GT) isn’t as quick to fire up or down ratios as you’d like. Renault makes great claims of the gearbox having a multi-change down function in Sport mode allowing you to make sequential changes quickly, but we found it to be hesitant. 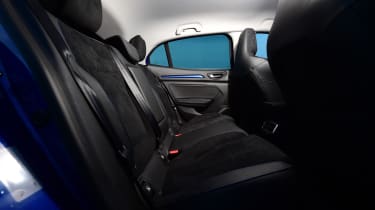 GTs also get something called 4Control. Essentially it’s Renault-speak for four-wheel steering and has appeared on cars like the Laguna Coupe in the past. At speeds of less than 50mph, the rear wheels turn in the opposite direction to the fronts, aiding maneuverability, while at speeds above 50mph the rear wheels turn the same way as the fronts giving added stability. While it sounds neat the reality is it makes the rear feel disconnected and just plain odd around town.

We also drove a standard Megane with the lowered-powered 1.6-litre diesel under the bonnet and in an as-yet-unnamed high-spec trim, and it was the star of the launch. With 128bhp, a claimed 70.6mpg and 103g/km of CO2 the figures look good on paper, and in the real world it was just as pleasing. It’s quiet and punchy and with the standard steering and suspension set-up, it was ironically more fun to drive than the GT.