Alpine has revealed UK prices and specifications for the reborn A110, which is on sale in Britain now.

With the launch special Premiere Edition sold out in the UK, Alpine now offers two regular versions of its Porsche Cayman fighter, with the base A110 Pure priced from £46,905 and the range topping Legende starting at £50,805.

The Pure version is as basic and as light as the A110 gets, tipping the scales at 1,098kg. Leather trimmed seats, air-conditioning and sat nav are standard, while uprated Brembo brakes, an active sport exhaust system, and six-way adjustable seats are on the options list, as is a parking camera and parking sensors

The A110 Legende gets the six-way seats and parking assistance features as standard alongside an uprated audio system, unique 18-inch alloy wheels and aluminium finished pedals. The larger 320mm Brembo discs and the sports exhaust system are still options though, priced £936 and £1,380 respectively. Electrically folding door mirrors and an autodimming rear view mirror are both optional extras on both versions as well, priced £468 and bundled together.

In total, Alpine offers six paint colours for the A110 - a mixture of blue, black, grey and white shades. All UK cars come with a three-year/60,000 mile warranty.

Alpine A110: Engine, weight and performance 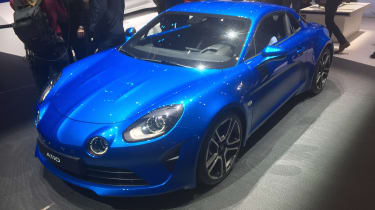 The Alpine A110 uses a mid-mounted 1.8-litre turbocharged four-cylinder engine producing 249bhp and 320Nm of torque. Power is delivered to the rear wheels via a seven-speed dual-clutch gearbox.

The A110 makes use of a lightweight aluminium construction, so that 249bhp figure – almost 100bhp down on that of the Porsche 718 Cayman S – translates to around 230bhp per-tonne – only 11bhp behind the Cayman S.

The lightweight construction paired with the 249bhp turbo motor means the A110 gets from 0-62mph in 4.5 seconds - a tenth of a second faster than a Cayman S manual - and on to a limited top speed of 155mph.

New Alpine A110: Design and interior 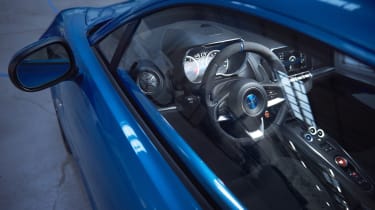 Design cues from the original ‘Berlinette’ Alpine A110 are scattered onto the new car. Namely the curves which were present on almost all of the classic’s body panels, have been brought across to once again produce a car with an incredibly smooth shape. To complement this, there is a flat floor and functional diffuser, which, when paired with a low drag coefficient, helps the A110 glide through the air.

Inside, there is a mixture of leather, carbon-fibre and aluminium. The seats are single piece buckets, helping keep the occupants held firmly in place. Unlike some cars, the production A110 stays relatively true to the design of the concept car on which it is based, using the same central infotainment screen, centre console, quilted leather, and digital dash as found on the inside of the concept.

Alpine could make an even hotter version of the A110, potentially harnessing engineering know-how from Renaultsport. The performance arm of the French manufacturer could bump the A110’s 249bhp motor up to around 300bhp.

While that might not sound like much, Renault promises the focus will be on low weight to worry the likes of Lotus. The extra power will be made possible by tweaks to the ECU and cooling system, with larger air intakes at the front and in the doors. 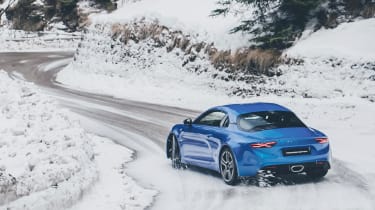 Other exterior changes will reportedly include swollen rear wheelarches to allow wider tyres to be fitted, boosting grip and stability. Racier alloy wheel designs will also debut, and the front end gets cross-hatched LED lights to distinguish it from the regular car.

What do you think of the new Alpine A110? Let us know in the comments section below...

Welcome to our Geneva Motor Show hub page, scroll down for all our Geneva content...
Renault could cut UK models in no deal Brexit profit drive