Trying to justify the Trophy-R as an ownership proposition is tough when the day-to-day usability is so compromised, the price is so high and the standard 275 Trophy is so good. However, on the right road the grip, stability and pace has to be experienced to be believed. So for track enthusiasts with deep pockets and after something with rarity and record-breaking pedigree, the Trophy-R is as good as it gets. Hats off to Renault for having the confidence to build it and reinforcing its mastery of the hot-hatch class.

Hot hatches don’t come any more extreme than this. The Renaultsport Megane 275 Trophy R is the spiritual successor to the Megane R26.R and the exact car Renault used to set a new front-wheel drive Nurburgring lap record of 7min 54sec back in June 2014. Now it’s available to 250 brave customers around the world, with just 30 examples coming to the UK. 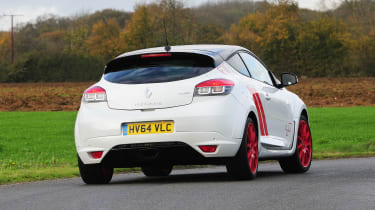 Ohlins adjustable dampers, composite front springs and an Akrapovic titanium exhaust complete the standard equipment list, although you can go a step further (as fitted to our test car) with a £1,995 Nurburgring record pack that adds a lithium-ion battery (-16kg), six-point harnesses and larger but lighter front brake discs.

Let’s get the bad bits out of the way first. When you remove over 20kg of sound insulation, refinement suffers, so at 70mph the roar from the tyres drowns out the radio (a option mercifully put back in to our test car, along with sat-nav) and any conversation you were hoping to have with your passenger. 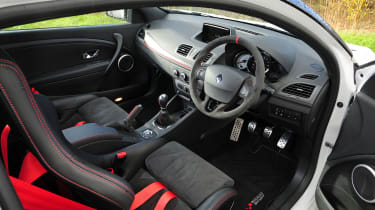 The ride is brittle over pot holes and bumps, but not unbearably so, and a lack of back seats rules it out as a rapid family runaround, although it does leave a large luggage space where the rear bench used to be.

And then there’s the price. At £36,420 before you’ve added the Nurburgring record pack, it’s a full £7,500 more than the already-brilliant 275 Trophy. To justify that sort of outlay it’ll need to be absolutely stunning at the things it was designed to do well – post lap times and devour B-roads.

The two-seater layout means the Trophy R is less versatile than the standard Renaultsport for carrying passengers, but stripping out the rear seats has resulted in acres of space in the back. 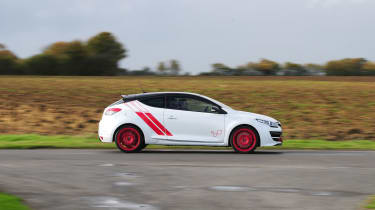 The rear strut brace has a cargo net attached to it to stop items rolling forward into the passenger compartment, while Renault has designed the boot so that it can accommodate a set of tyres. Go for the Nurburgring Record Pack, and you get a set of branded tyre covers.

The figure-hugging Recaro seats require a special technique to climb in and out, where you swivel on your backside with your leg cocked in the air to get over the high sides. Once in place, the seats are firm, but reasonably comfortable. Rear visibility is poor due to the lack of wiper, although standard rear parking sensors help to compensate for this.

Press the starter button, and the 2.0-litre turbo buzzes into life. There’s plenty of noise in the cabin, thanks to the removal of 21kg worth of sound deadening, but use all the revs and the Akrapovic titanium exhaust delivers a distinctive note, with pops and bangs if you time your gearshift right. 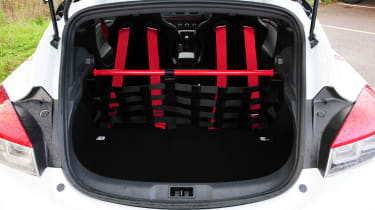 Get rolling, and you’re immediately aware of the Trophy R’s extremely firm ride. The standard Ohlins Road & Track dampers deliver brilliant body control, but the ultra-stiff chassis means the Mégane follows every ripple and rut in the road.

You can adjust the dampers to suit the surface, although this involves getting your hands dirty under the wheelarches. Urban or motorway driving is a trial more than a joy, as the harsh ride and lack of sound deadening mean every trip will leave your body tingling and ears ringing. 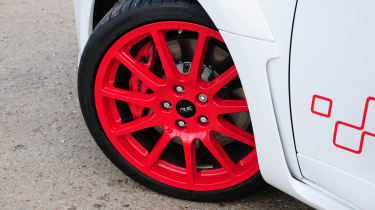 But head for a twisty road, and the Trophy R comes into its own. The track-focused Michelin Pilot Sport Cup 2 tyres deliver phenomenal grip in the dry, while switching the car to Sport or Race modes means the sharp chassis, stiff dampers and direct steering let you know exactly what’s going on beneath you, and makes attacking a twisting road an absolute joy.

These modes also liberate the full 271bhp on offer, and the engine’s meaty power delivery feels very responsive, plus there’s barely a hint of torque steer under hard acceleration.