Warm hatch is a decent, but pricey, package 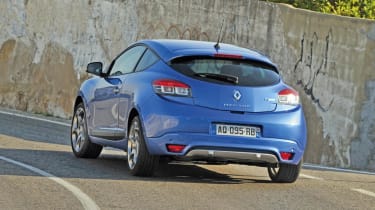 The warm GT model is a welcome addition to the Megane range. The subtle tweaks inside and out boost the car's desirability, and they are backed up by strong pace. But at £22,410 it's expensive- that's only £750 less than the Renaultsport 250 Cup. While the latter is far more focused and gets fewer luxuries, it's much more fun to drive.

FOR Mégane buyers who want more speed than sunshine, Renault has unleashed the GT.

Designed to fill the gap between the standard Coupé and flagship Renaultsport 250, it features a racy bodykit with special front and rear bumpers, plus 18-inch alloys.

The chassis has been tweaked by Renaultsport, too, in a bid to improve the handling – the GT gets the same suspension and sticky Dunlop tyres as the 250.

Finishing off the sporty character is the exclusive Malta Blue paintwork, rear diffuser and GT badging on the grille and tailgate.

The interior gets the same treatment, with a Renaultsport-badged steering wheel and front seats. Aluminium pedals, an analogue rev counter and polished carbon highlights also feature. This combines to give the car a more focused and aggressive feel. The question is, does the GT deliver on its performance promise? Renault offers a choice of turbocharged engines for the newcomer: a 180bhp 2.0 petrol and 160bhp 2.0-litre dCi diesel. We tried the former, and were impressed.

Posting a 0-62mph time of 7.8 seconds, it’s quick off the line, and with 300Nm of torque from only 2,250rpm, there’s real responsiveness in every gear. A smooth note with a neat rasp from the exhaust adds to the GT’s appeal. Renaultsport’s touch is evident in the handling, too, which is sharp and reactive, even if the steering could do with a little more feel.

When you’re not in the mood, the GT cruises well, and despite the large wheels, it’s extremely comfortable.