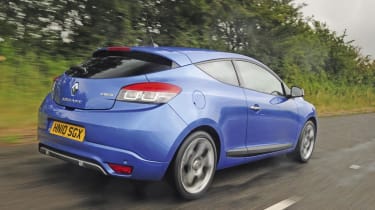 Renault’s fastest diesel hatch falls a little wide of the mark in three-door coupé guise. While the Mégane GT delivers decent economy, the handling isn’t a patch on that of the Renaultsport flagship. It’s very expensive too. Still, sporty GT trim is available across the entire Mégane range – five-door, Sport Tourer estate and C-C coupé-cabrio – and on one of those models, it makes a lot more sense.

And the firm isn’t stopping there, as it’s added the sporty GT to the Mégane range. We drove the Coupé GT with 2.0-litre turbo petrol power last month, and now we get behind the wheel of the diesel version.

From the outside, it looks identical to the petrol model, with sporty bumpers front and rear, dark chrome exterior trim and 18-inch grey alloys. Our car’s distinctive Malta Blue paint is an exclusive option for the GT, too.

Inside, the well built cabin is decked out with GT logos on the sports seats and satin grey dash trim, while the regular Mégane’s digital dials have been replaced by the analogue items from the Renaultsport 250 hot hatch (driven opposite). GT-spec cars also get sports suspension developed by the performance arm.

In keeping with the GT’s racy nature, under the bonnet is the most powerful diesel engine Renault produces – a 160bhp 2.0-litre. It gives strong straight-line pace, with 0-62mph in 8.5 seconds – only seven-tenths behind the turbo petrol model. And as it’s a diesel, it’s more efficient than its stablemate. The company claims 47.9mpg combined – a 10mpg improvement.

On the road, the newcomer delivers on the promise of its racy styling. It turns in sharply and provides plenty of grip – the extra weight of the diesel engine has in no way blunted its cornering ability. As with the petrol version, though, the steering doesn’t provide enough feedback.

Plus, the stiff suspension crashes over potholes and bumps, sending shudders through the cabin. This is a surprise, as the Mégane 250 has an even sportier set-up, yet absorbs bumps better.

The biggest stumbling block for the diesel GT – as with the petrol car – is its price.

It weighs in at £23,475. That’s only £170 less than Volkswagen’s Golf GTD, which we think is a much more accomplished high-performance diesel.

The silver lining is that you can get the looks of the GT on Dynamique-spec Méganes by specifying the GT Line upgrade. This can be selected with any bodystyle in the range and nearly every engine.

Rival: Golf GTD Our favourite hot diesel model combines the all-round driving ability of the petrol-engined Golf GTI with fuel economy of 50mpg-plus. It’s £170 more than the Mégane, at £23,645, but worth every penny.