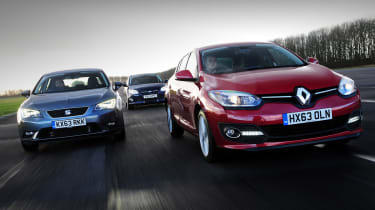 The French car industry is currently taking a beating, with falling sales, high overheads and a failure to tap into new classes hitting the country’s manufacturers hard.

Renault has suffered particularly badly, but it’s bouncing back. The brand launched an all-new Clio last year, while the Captur crossover and the all-electric Twizy, ZOE and Fluence family demonstrate that it still has the ability to innovate. That innovation has now been focused on the Megane hatch. But rather than go for an all-new model, Renault has updated the family car originally introduced in 2008.

Is it enough to keep pace in a closely fought class? To find out, we’ve lined up the 1.2 TCe turbo petrol against two tough rivals. The SEAT Leon is our current class champion, and comes with similar petrol power, while the Ford Focus gets a punchy 1.0-litre three-cylinder turbo. Can the Renault make an impact? Or is the update too little, too late? 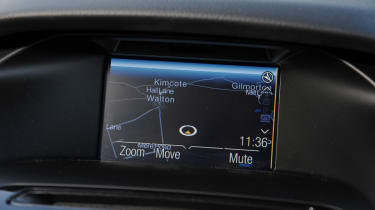 The Megane and Focus come with sat-nav as standard, while it’s a £745 option on the Leon. However, the SEAT’s system is the easiest to use, with an intuitive touchscreen and buttons. The Renault’s joystick is okay, but the controller feels spongy. The Ford’s system is confusing, as it’s easy to mistakenly use the rotary volume control instead of the direction buttons when you’re on the move.

According to the manufacturer figures, the Megane has the biggest boot here. There’s not much between it and the Leon, although both cars are more spacious than the Focus. The Renault loses out to its rivals on rear space – it’s cramped and has short door armrests. 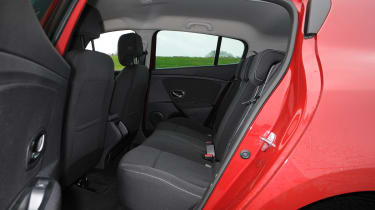 A £16,790 price tag gives the Leon the edge on company car tax, with lower-rate taxpayers facing a bill of £474, compared to £526 for the Focus and £556 for the Megane. The Renault has a lower price than the Ford, but is a tax bracket higher. 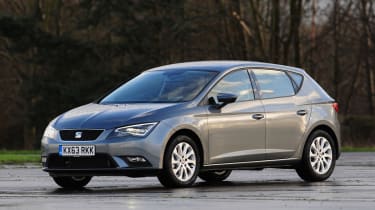 A great combination of comfort, handling and quality puts the Leon at the top of the pile. The 1.2 TSI is our favourite engine, too, as it never feels underpowered and is reasonably economical. Top value for money is a bonus. 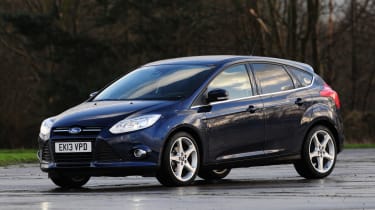 While the Focus matches the SEAT for build quality, performance and economy, there are too many negatives for it to take victory. The engine note won’t be to all tastes, while the small boot also pegs it back. 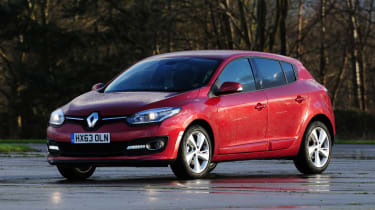 Unfortunately, it’s too little, too late for the Megane. This update freshens the looks, and the 1.2 TCe offers reasonable running costs, but the Renault can’t compete in terms of quality, refinement or comfort. It’s expensive, too.