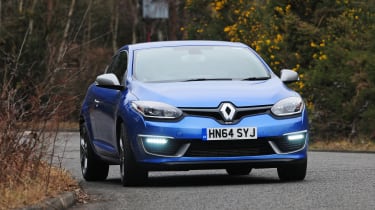 The Renault GT 220 Coupe is a logical and accomplished addition to the Megane range. There are some equally capable rivals on the market which are a little cheaper to buy and run, but the Renault is certainly up there when it comes to excitement.

It’s aimed at buyers who are seeking something a little more exciting than the standard Megane, but don’t want to go the whole hog with the Renaultsport Megane 265 Trophy. Yet just because this newcomer doesn’t bear the famous Renaultsport name, don’t think you’re getting shortchanged.

The neat spoiler sets the GT 220 apart outside, and there’s lots inside; the split-fold rear seats add a practical touch.

Beneath the unassuming exterior, the brand’s motorsport arm has fettled the engine and chassis, so as in the estate, you get the basic 2.0-litre turbo from the 265 Trophy – detuned to 217bhp – and an enthusiastic appetite for bends. 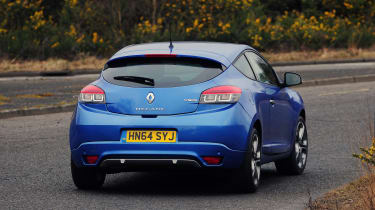 There’s still enough poke to keep you suitably entertained, however, with a strong spread of torque helping you from 0-62mph in 7.6 seconds. There’s slight hesitation from the engine under hard acceleration, but above 3,000rpm, it’s lively and responsive. However, we found heavy throttle inputs caused the front axle to become slightly overwhelmed and spin the tyres in corners, as there’s no limited-slip diff.

The recalibrated steering fits the GT 220’s more bullish character, while the retuned suspension set-up irons out excess body movement. The ride is firmer than the standard Coupe’s, but still comfortable enough for daily use.

As well as the Renaultsport chassis and engine, the GT 220 Coupe includes a pair of sports seats, carbon-fibre detailing and aluminium pedals. Air-con, sat-nav and a reversing camera come as standard, too.