Renault aims to bridge gap between standard Megane and Renaultsport models with the GT 220. We drive practical Sport Tourer version 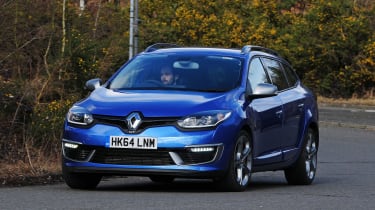 Although an estate version of the full-fat Renaultsport Megane would have been nice, in the real world this warmed-up Sport Tourer GT 220 makes more sense. There’s bags of fun to be had from its Renaultsport-derived engine and chassis, but enough forgiveness in its setup to be classed as a comfortable family runaround. The high-running costs could put potential buyers off, however.

If you always fancied a Renaultsport Megane but a growing family means you’ve never been able to scratch that itch, the French manufacturer now has a solution ­– to an extent. Enter the new Renault Megane Sport Tourer GT 220 ­– a fast, practical and affordable alternative to the likes of the Ford Focus ST Estate and Skoda Octavia vRS Estate.

It’s a new entry-point to Renaultsport ownership, featuring a lesser-powered version of the same 2.0-litre turbocharged engine as found in the rabid 275 Trophy-R, a Renaultsport tweaked chassis and uprated springs and dampers. Think of it as a Renaultsport Megane lite, but with a big boot. 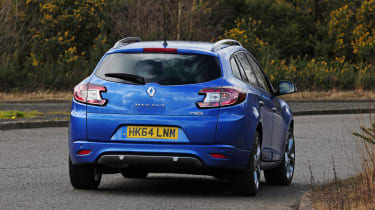 Here, 218bhp and 340Nm of torque is served up from the 2.0-litre engine, with a six-speed manual gearbox sending all that power to the front wheels. Unlike its beefier sibling, the GT 220 doesn’t come with a front limited-slip differential, so stamp on the throttle and you can feel the steering wheel squirming in your hands while the front wheels fight for traction. The torque steer is manageable but the front axle is at the limit of what it can take in terms of grunt.

That’s highlighted when you arrive at a corner, too. Turn in and the front end bites keenly with the chassis keeping everything balanced and poised, but any enthusiastic throttle inputs will push you out wide. The 247bhp Focus ST Estate comes with a neat torque vectoring system which helps keep things tidy when cornering ­– plus it’s almost £1,000 cheaper. The Renault does deliver an amusingly raspy exhaust note as the revs climb, though, which encourages you to push it to its near-7,000rpm limiter. 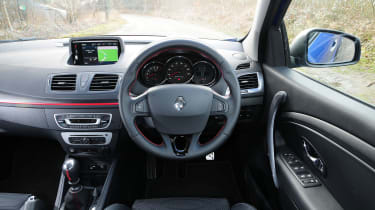 Keep things at a sensible speed, though, and the GT 220 is real entertainer. The six-speed manual is superb, with crisp and accurate changes, while the recalibrated steering feels beautifully balanced and precise.

Swish 18-inch alloys come as standard but even allied with the stiffer suspension setup, the GT 220 rides with real compliancy, with a great balance struck between a comfortable, yet focused set-up. You can feel the road and changes in surface beneath you but harsh vibrations are well isolated from the cabin. 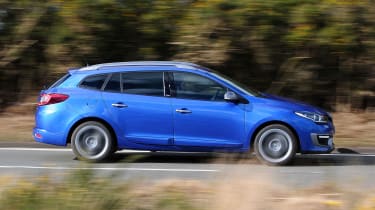 Renaultsport’s fettling doesn’t stop at the greasy bits either. Inside, you get a pair of supportive sports seats, aluminium pedals and carbon fibre detailing on the dash. On the outside, a set of GT front and rear bumpers give a racier look, with a contrasting rear diffuser also fitted.

In terms of practicality, the Renault sits bang in the middle of the aforementioned Focus ST and Octavia vRS, with a 524-litre boot with the rear seats in place and 1,600 litres with them folded flat.