The latest Renault Megane RS 275 is still as good as ever to drive, but it's much more focused than rivals 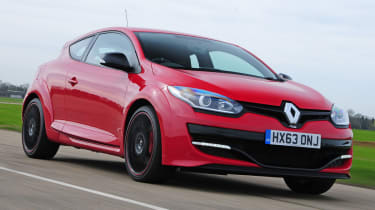 The current Renaultsport Mégane has been facelifted in line with the regular model, with a new nose and tweaked interior. It's also now available with the Cup chassis as standard in the Cup-S model, adding a limited-slip differential and sportier suspension settings.

A titanium Akrapovic exhaust plus Ohlins dampers and semi-slick Michelin tyres are all optional, which add even more sporty character to the car.

The Renault Mégane RS has consistently been the benchmark  for focused handling in the hot hatchback market over the past few years. Sharp responses mean it should be on any hot hatch buyer’s shortlist, even though the standard Mégane’s star has faded.

It's good value too, if you don't go for any of the pricey options, costing much less than the current crop of mega hatches like the Honda Civic Type-R, despite being just as good to drive and nearly as quick. It is feeling dated inside, though, and might be tough to live with on a daily basis.

One of the finest-handling cars in its class, despite its age

The sporty looks of the Renault Mégane RS are backed up intense driving experience. Fire up the 2.0-litre turbo engine and there’s a purposeful thrum from the exhaust - blip the throttle, and the needle sweeps around the rev counter. The six-speed gearbox that Renault fits to the Renaultsport Mégane needs a bit of a firm hand, but it never baulks. 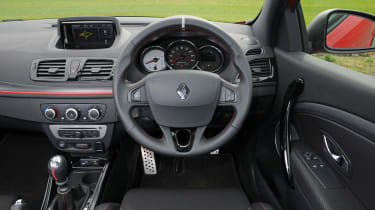 The Renaultsport Mégane gets plenty of mid-range power for overtaking, but its stiff Cup chassis plus extremely firm suspension set-up dominate the driving experience. You can feel every bump and undulation in the road through the seat, while the sharp steering is communicative, with lots of feedback through the wheel.

Order the optional Ohlins dampers and the wheels flow beautifully with the road surface, while body control is simultaneously improved. It's an expensive box to tick, but worth it if you plan to take the car on track. The Michelin Pilot Sport 2 tyres provide endless grip and help you to adjust the car's line mid-corner with little lifts of the throttle, while the Akrapovic exhaust gives you lots of pops and bangs, but it's fairly muted in the cabin.

The Renaultsport Mégane's CO2 levels of of 174g/km are decent, but it'll cost more in company car bills than some of its rivals. Its 2.0-litre engine achieves a claimed 34.0mpg on a combined cycle, which isn't too bad considering the performance on offer - but the rival SEAT Leon Cupra manages over 42mpg.

That car is more expensive to buy, however, and that's the case generally for the Renault. Without the expensive options, the 275 is a great value hot hatch, with nearly as much performance as higher-priced rivals.

Despite being an older design the RS still looks great

The Renault Mégane RS is based on the previous three-door Mégane Coupé, but unlike the conservative looking SEAT Leon Cupra and VW Golf GTI the Renault gets some extra touches to mark it out from the standard car.

For starters, it benefits from body-coloured plastic wheelarch extensions and deeper sills and bumpers.Up front, the Mégane’s new face resembles the Renault Clio supermini, although the RS model’s lower grille treatment remains unchanged. The Renaultsport Mégane gets 18-inch alloys in black or silver, while a choice of three 19-inch wheel designs is also available as a £1,000 option - these include red pinstripe, silver stripes or diamond cut rims.

Inside, Renault has given the Renaultsport Mégane the most basic of updates found on the interior of the the previous-gen standard car. This focuses on the dashtop display, which features a larger screen for the infotainment system.

Elsewhere, the centre console is unchanged, and therefore looks dated - but the RS adds racy red seatbelts, figure-hugging optional Recaro sports seats and red detailing on the dashboard and gearlever. Everything in the Renaultsport Mégane seems fairly well put together, but there are lots of hard plastics.

The RS car's boot opening is high and narrow with a 344-litre loading capacity. The Renaultsport Mégane gets split-folding rear seats as standard, but even when they're folded, the 991-litre boot is still far from the class best. Its back seat space is adequate, and the optional Recaro front seats don’t cut into legroom too badly. However, rear passengers will still feel cramped with tinted windows and small rear glass.

Up front, the figure-hugging seats found in the Mégane RS are firm but not uncomfortable. However, the cabin doesn’t have as many storage cubbies as the found in some of its rivals, plus the door bins and glovebox are smaller, and the centre console space is taken up by the joystick that controls the infotainment system.

The Renault Mégane is a well established car and has been around for a while. It bucks the perception that Renault reliability is an issue for buyers and the RS model is no exception. The RS didn't appear in our 2016 Driver Power survey, but the Megane it's based on came in 62nd place overall and 53rd for reliability specifically.

The only issues you might have are likely to be with electronics, although software updates should help to rectify any problems. Renault’s four-year warranty and breakdown assistance is offered on the hot Mégane, so that should give you added peace of mind.

As this car has been around for some time, it hasn’t been tested under Euro NCAP’s new, stricter conditions – although it did earn a five-star rating in the safety body’s old-style tests. There are six airbags, plus the RS model features big Brembo brakes that will provide consistent stopping power, even when slowing from high speed.