The Megane Sport Tourer looks stylish and is good to drive, but it's not as roomy as some rival estates 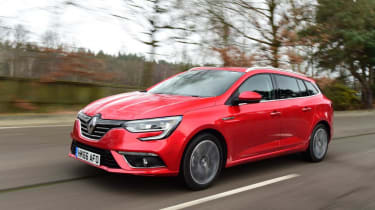 The compact estate is a spin-off from the compact hatchback class, and while crossovers are currently popular as a hatch alternative, if you go for a compact estate, you're likely to get more space for your money. Ever since the Renault Megane Mk2 went on sale in 2002, there has been an estate version on offer. The current model is called the Renault Megane Sport Tourer to give it an extra modicum of style, although similar names are used by rivals such as the Vauxhall Astra Sports Tourer, Toyota Auris Touring Sports, Hyundai i30 Tourer, Kia Ceed Sportswagon, Peugeot 308 SW and SEAT Leon ST.

While some buyers are migrating towards crossovers and SUVs, the compact estate still has a lot to offer, and Renault has given the Megane estate a big slice of style to help it stand out. It gets the same look as the Megane hatch, with distinctive C-shaped daytime running lights, and looks largely identical from the nose all the way to the back of the rear doors. However, the wheelbase has been stretched by 43mm and the car is 267mm longer overall to create more space inside. 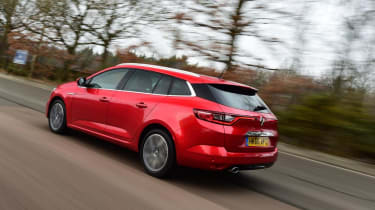 While the Megane Sport Tourer arrived in 2016, the range was given a shake-up in 2018 to simplify the models on offer. Gone are the older Expression, Dynamique and Signature trims, replaced by a three-model line-up comprising of Play, Iconic and GT Line trims. This saw starting prices drop to around £18,500 for the estate, a premium of around £1,200 over the hatchback, but standard kit was increased at the same time.

The engine range was also reduced to simplify the choice available. This means the most powerful Megane GT models with 1.6 dCi diesel and 1.6 TCe turbo petrol power have disappeared from the line-up, leaving the decent 1.2 TCe 130 and long-standing 1.5 dCi 110 as the only engine options. Both engines are available in all trims, and both come with a six-speed manual as standard - there's a seven-speed EDC auto option with the 1.2 petrol, and a six-speed EDC box with the diesel. All models are front-wheel drive.

As well as the similarly named rivals above, the Megane Sport Tourer also goes up against the Skoda Octavia Estate, Ford Focus Estate and Volkswagen Golf Estate. If you're after a leftfield choice, then there's also the Subaru Levorg to consider.

The current Renault Megane is a class front-runner in hatchback form, so the pressure is on for the practical Sport Tourer estate. Fortunately it features the same engines and trims as the standard car, so it has the potential to challenge the class best.

By adding a roomy and versatile estate bodystyle, Renault has further broadened the Megane’s already impressive appeal. The handsome body isn't quite as roomy as you'll find in some rivals, but the Megane is refined, well equipped and cheap to run, making it a fine alternative to more fashionable crossovers, as well as other estate cars. It’s also supremely comfortable with class-leading refinement.

The Megane Sport Tourer drives very much like the Renault Megane hatch, and that’s good

Despite its racy-sounding name, like the hatchback, the Megane Sport Tourer’s driving dynamics are geared towards comfort and refinement rather than driving thrills. The focus on comfort is highlighted by the car’s soft and supple suspension. Large potholes can send a shudder through the cabin, but for most of the time the Renault effortlessly soaks up bumps. It’s quiet, too, transmitting less wind and road noise into the cabin than the more stiffly suspended VW Golf Estate, for example. 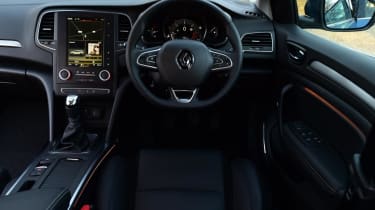 On the motorway the Renault feels responsive, so it’s easier to keep up with changes in traffic speed without having to shift down. It’s also comfortable at speed. Off the motorway the Renault is nearly as good to drive as an Astra, with quick steering and a grippy chassis, but it’s not quite as sharp as the Vauxhall because it’s more focused on ride comfort.

The Mégane gets a comprehensive mode selector, offering a choice of Sport, Neutral, Comfort and Eco settings. They change the steering weight and engine response, with a sharper feel in Sport mode and a more relaxed feel in Eco and comfort. There’s also an option named Perso, which is what Renault calls its customisable setting.

The six-speed manual isn’t as slick as the units in the SEAT Leon ST or Skoda Octavia Estate, but it’s not unpleasant to use and is worth going for over the dual-clutch automatic for the money you’ll save.

After the 2018 update, the sole petrol option for the Megane estate is a 1.2 TCe three-cylinder unit with 128bhp. But we'd rather go with the four-cylinder diesel: a 1.5  dCi 110. It’s an efficient unit while still having plenty of performance. 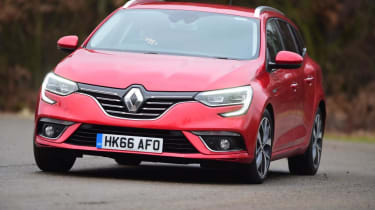 The 109bhp 1.5 dCi is smooth and unobtrusive, but at the track it proved to be slower than its contemporaries. It completed the 0-60mph sprint in 10.9 seconds, which was nearly a full second slower than a Skoda Octavia Estate powered by the VW Group's 113bhp 1.6 TDI diesel.

However, thanks to the closely stacked ratios of the Renault's six-speed gearbox and decent 250Nm torque output, it put on a stronger display during our in-gear tests. It has an edge over rivals that come with a five-speed gearbox, so it doesn’t trail them on the road. The dCi engine responds eagerly enough, and rarely feels as underpowered as its on-paper figures suggest.

To keep running costs low, go for one of the Renault Megane Sport Tourer diesel. The dCi 110 returns 76.4mpg and emits just 96g/km of CO2. ANd with the dual-clutch auto, those figures change to 74.3mpg and 98g/km respectively. 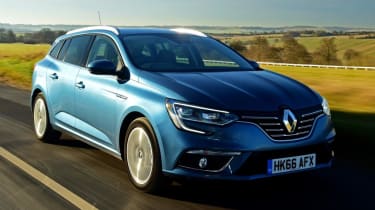 The cheapest Renault Megane Sport Tourer sits in group 14E - although the dCi 110 model is a close second as it’s in group 15E.

While the car’s predicted residuals of 36.7 per cent are nothing to write home about, our figures suggest it’ll hold more of its value than an equivalent Vauxhall Astra Sports Tourer or Peugeot 308 SW.

The standard five-door Megane is one of the most stylish compact hatches you can buy, so it’s no surprise to find this design flair has been carried over to the Sport Tourer. By extending the wheelbase by 43mm and the length by 267mm, Renault’s designers have seamlessly grafted on an estate rear end without spoiling the car’s proportions.

Underneath the Sport Tourer’s sleek lines is the same Renault Nissan Alliance CMF CD platform that underpins everything from Renault’s larger Scenic MPV to the Nissan X-Trail SUV. It’s light and strong, and features a simple layout of strut suspension at the front and torsion beam at the rear. 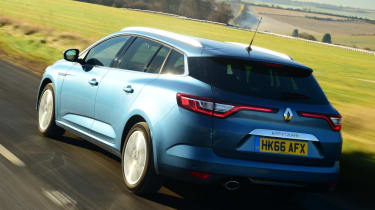 Climb aboard and you’ll discover the car feels remarkably upmarket. The wraparound dash is clearly laid out, and features classy TFT dials and Renault’s portrait-style R-link infotainment. High-quality materials are used throughout, and the fit and finish are easily a match for the Vauxhall Astra’s and Peugeot 308’s.

There's no way you could miss the touchscreen display in the Megane’s cabin. It’s is a bit different to the competition, because it’s portrait-orientated rather than landscape. It’s also a big unit, at 8.7 inches, but it looks even bigger thanks to the way it’s mounted in the dashboard.

The interface is colourful and suits the Megane’s funky looks, but the fact that you can only control the air-con fan speed using a sub-menu means it’s a frustrating system to use on the move. It feels imprecise and is annoying to change while driving. 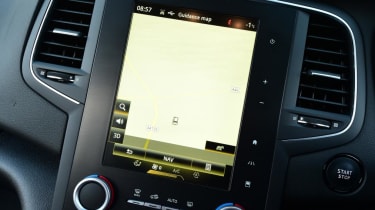 There’s also Apple CarPlay or Android Auto, which matches most rivals, but the system doesn’t fit the screen as well as in the other cars’ set-ups. It’s still an important and useful addition, though, and puts the Renault ahead of its rivals for infotainment.

It’s not the biggest estate around, but the Sport Tourer is still spacious

Inside the Renault you’ll discover large door bins, a lidded compartment between the front seats and a handy tray ahead of the gear lever. However, the glovebox has to share space with the fuses and so it’s smaller than on left-hand-drive versions.

While the Renault isn’t as big inside as some of its rivals, the difference is small enough to make little difference to most buyers - and the Renault does have styling on its side as well.

At 4.63m long, 1.46m high and 1.84m wide, the Megane Sport Tourer is slightly smaller than a Vauxhall Astra Estate, though the Vauxhall is thinner.

There’s plenty of space up front, and with 216mm of knee room in the second row the Megane Sport Tourer has plenty of space for a family. Even adults won’t have trouble sitting in the back, as there’s just as much headroom back there as its main rivals. 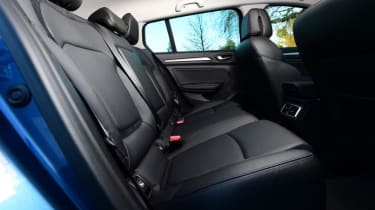 The Renault Megane Sport Tourer falls between the Vauxhall Astra Sports Tourer and Peugeot 308 SW for outright space. For instance, the Megane’s luggage area will swallow 580 litres, which is 40 litres more than the Astra’s but 80 litres down on the 308’s.

Lower the rear bench using the levers in the boot and you liberate a handy 1,695 litres of load capacity. Once again, this is 80 litres shy of the Peugeot’s maximum, but what the Renault lacks in volume it makes up for with versatility.

For example, the boot floor features a handy pop-up load divider, plus it lifts to reveal a deep hidden storage area. There are also deep cubbies set into the boot sides, multiple shopping bag hooks and a 12V power supply.

Renault has a number of accessories to make the Sport Tourer even more practical. There’s a £125 boot liner and 500-litre roof box for adding extra capacity.

Renault has come on leaps and bounds in the past few years, but it hasn't managed to maintain its consistency. With its improved products and customer service, the brand has clawed its way up our Driver Power satisfaction survey, finishing in a strong eighth place in 2016. However, while Renault's dealers topped the dealer charts in the 2016 Driver Power survey, they slipped back in the 2017 results.

There’s good news when it comes to safety, because the Megane was handed a five-star rating by Euro NCAP in 2015. All versions get six airbags and stability control, while lane-departure warning and traffic-sign recognition are available.

Renault used to offer a four-year/100,000-mile warranty, but as most owners trade in their cars after three years, Renault has shortened the warranty cover by 12 months to reflect this. A pre-paid servicing pack that covers three years of maintenance for about £300 is also available and its purchase can be combined with any finance you may take out to buy a Megane. 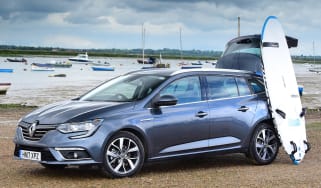 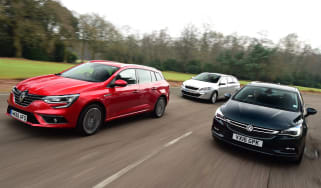 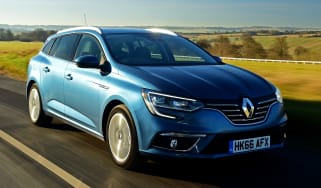 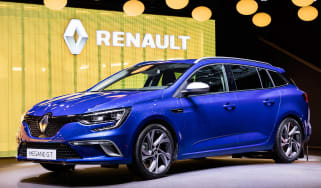 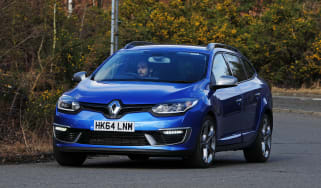 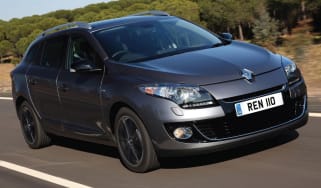 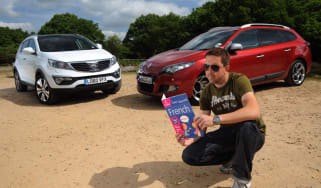 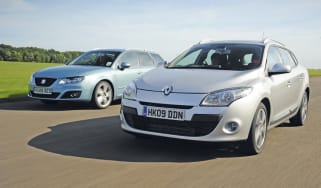 Estate buyers demand huge practicality, but the Renault Megane and SEAT Exeo are just as strong on style. Which is better?
Renault Megane Sport Tourer 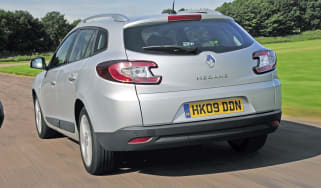 Is most practical version of new family car best model in range?
Skip to HeaderSkip to Content