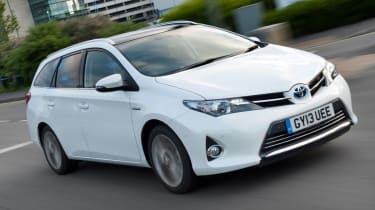 The Toyota Auris Touring Sports is the carmaker’s take on an estate version of its family hatch. Pitched against the Ford Focus Estate, Kia Cee’d Sportswagon and Skoda Octavia Estate, the Auris is designed to offer lots of space, plus the option of the same hybrid powertrain that’s fitted to the Prius and Lexus CT 200h. Toyota expects to sell around 4,000 estates per year, with 70 per cent to be to fleet customers, with 45 per cent of total sales being the hybrid – thanks to its low 85g/km CO2 emissions giving a 10 per cent BiK rating. It falls short of its rivals in the way it looks and the way it drives, but is comfortable and refined. Importantly for an estate car, boot space is impressive.

Although it’s called the Touring Sports, that’s more an attempt by Toyota to fit in with its rivals, rather than a promise that the car is a decent drive. The steering is light and lacks feel, while bodyroll is pronounced. The 1.6-litre petrol engine is smooth, and has a slick gearbox, but it lacks torque. The hybrid offers excellent refinement around town that’s spoiled by the CVT gearbox, which causes the 1.8-litre petrol engine to drone under acceleration. Despite the boost from the batteries, the hybrid is also short on torque. The Auris does feature powerful brakes and a comfortable ride, while the interior remains very quiet at the motorway limit.

This is where the Auris claws back some ground. Thanks to the hybrid option CO2 emissions are cut to 85g/km on Icon-spec cars with 15-inch alloys, and 92g/km for top-spec Excel models on 17s, while all hybrids claim over 70mpg. This cuts company car tax bills and fuel costs extensively, while Toyota claims that the hybrid system’s fewer moving parts mean cheaper maintenance too. The rest of the range features downsized engines which look decent on paper, but can struggle to shift the car along, particularly if you carry heavier loads – leading to higher overall running costs.

The Auris Touring Sports is the latest car to feature Toyota’s ‘Keen look’ design theme. This works well on the longer estate model, particularly at the front and side, where the rising beltline gives the car a more sporty look. However, the rear doesn’t work so well, with a bulbous bumper making the car look heavy, and tail-lights that look like they were borrowed from a 10-year old Hyundai. Inside, the story isn’t much better, with an upright slab of a dashboard that’s a real uncohesive mixture of scratchy plastic textures and shapes.

Toyota has clearly thought pretty hard about maximizing space in the estate’s boot. The load lip is 100mm lower than on the hatchback, making it easier to stash items in the boot. The estate is 285mm longer than the hatch, which means that with the rear seats up, there’s a useful 530 litres of space. Drop the 60:40 folding rear seats with the pull of a handle, and this increases to 1,658 litres on all models – they hybrid’s batteries are mounted under the rear seats. There’s also underfloor storage areas, plus plenty of space around the interior for oddments, including a decent-sized glovebox. The car has three powerpoints, with one in the boot.

The Touring Sports is based on the same platform as the Auris, Prius and CT 200h, and uses technology and engines that are shared with these cars. All of which is a good thing, as Toyota is famed for its reliability, backed up by a decent service from dealers. The firm has added extra reinforcement to the rear of the car, to ensure that the estate is almost as stiff as the hatchback, and the Touring Sports also shares that car’s five-star Euro NCAP safety rating in the latest 2013 version of the test. 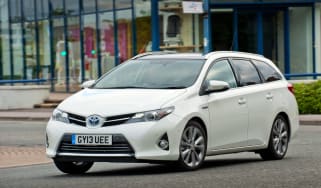