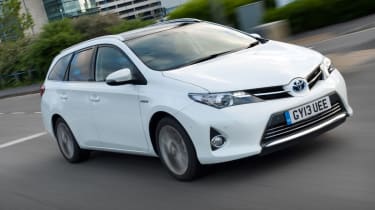 The hybrid is expected to make up 45 per cent of Auris Touring Sports sales. And while it’s really rather average to drive, it makes up for that with low running costs, solid reliability and acres of space. It’s no oil painting, but if you’re buying a car purely with your head and fancy something a little different from mainstream diesel rivals, it’s worth considering.

The Toyota Auris Touring Sports claims to offer generous space and rock-bottom economy, but then so do rivals such as the Skoda Octavia Estate. So what does the Toyota estate do that the others can’t?

Well, it’s available as a hybrid for a start, using the same system that powers the Prius. Slot the stubby gearlever into ‘D’ and the car moves off with a quiet, electronic whir.

Be gentle with the throttle and you’ll get the car up to 30mph before the petrol engine cuts in. The steering is light, but responds quickly around town, while the brakes offer a reasonably consistent pedal feel, despite blending the normal braking system with the hybrid motor’s regeneration.

On the open road, it’s clear that using the word ‘Sports’ in the car’s name is misleading. The car rolls quite a bit in bends, while the steering lacks the linear feel of the likes of the Ford Focus Estate.

The CVT gearbox blunts responses too, making the car feel slow. The ride is comfortable, although smaller bumps can jar through the cabin, while motorway cruising is quiet with just a whisper of wind noise around the A-pillars. Our top-spec car was fitted with 17-inch wheels and emits 92g/km of CO2, while the Icon model, which rides on 15-inch rims and is predicted to be the best-seller in the UK, emits 85g/km.

That makes the car cleaner than the hatch, cuts VED (road tax) rates to nil, and places the Touring Sports in the 10 per cent BiK company car tax band, adding appeal for fleet buyers.

Swing open the rear hatch and the load lip is 100mm lower than the hatchback. Seats up, there’s 530 litres of space – 54 litres more than a Focus Estate, but 80 litres short of the Octavia Estate. Drop the rear seats at the pull of a boot-mounted handle and boot dimensions swell to 1,658 litres.

Rear seat space is a little on the tight side, but there’s plenty of room in the front, with enough adjustment for the seat and wheel to allow you to get comfortable. The dash falls some way below the best in class, however, in terms of its ergonomics, its upright, overly bluff design and the mish-mash of cheap-feeling materials used in its construction.

As for the exterior, Toyota’s ‘Keen Look’ design theme actually works better on the estate than the hatch from the front and side. But the large rear overhang, oversized tail-lights and bulbous rear bumper make the car look dumpy from the rear.