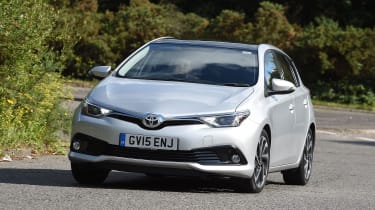 Subtle improvements across the board are welcome in the Toyota Auris. But even the competitive new 1.2 turbo petrol engine can’t elevate Toyota’s hatch above average in a talented class. It drives better than before, though, and should provide dependable family transport. We just wish the interior fit and finish had taken a bigger leap than it has.

The Toyota Auris has always had an image problem, but fortunately fleet buyers are largely interested in running costs instead. If you need proof, around 75 per cent of Aurises sold are hybrids.

Despite this,Toyota has taken a leaf out of rivals’ books with the facelifted car, adding a new 1.2-litre turbo petrol engine, as well as tweaking the styling and upgrading the cabin. While there’s no doubt the restyled front end and our car’s LED headlamps (a £795 option) improve the look, the Auris remains a little too fussy and uninspiring next to the sharp-suited Ford Focus and SEAT Leon. 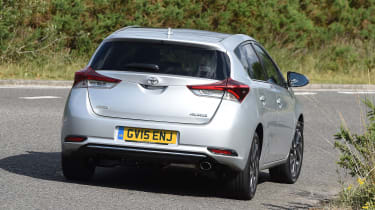 Inside it’s a similar story, despite smart new gloss black trim on the central dash panel. The centre stack on our example felt like it could be yanked clean off without much trouble, while general material quality still feels a notch lower than the best in class. The clock looks decidedly tacky, too.

That aside, it’s generally an easy-to-use layout, although the much improved touchscreen sat-nav is still a bit fiddly. It’s practical, too, with decent space for five, a 350-litre boot (34 litres more than in a Focus) and loads of storage solutions.

The new petrol sits alongside the old naturally aspirated 1.33-litre unit in the range. It idles quietly and is smoother when revved than the thrummy 1.0 EcoBoost in the Focus. It might not be quite as punchy low down, but mid-range pace is strong and it’s as flexible as you’d expect from a turbo four-cylinder despite a slightly clunky manual gearbox. It also returned 42mpg in our hands, which is broadly what you’d get out of rivals. 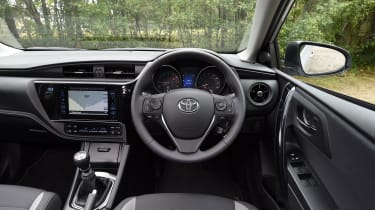 Toyota has also improved the old car’s lifeless steering and chassis, and the Auris now steers more accurately and rides a fraction better. Body roll is more noticeable than on rivals, however, and it lacks any sense of verve or engagement. A Golf balances ride and handling in a more astute fashion, but the Auris isn’t as far off the pace as it used to be.

For many, family hatches like these come down to price. Our mid-spec Design model comes decently kitted out, but the panoramic sunroof, LED lights and sat-nav push our test car well over £21,000. A similarly equipped 1.2 TSI Leon can be had for around £1,500 less, and that would be our choice every day of the week.