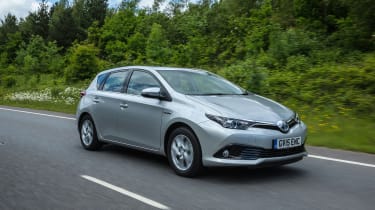 The Auris is one of only a few hybrids in the compact hatchback class, but Toyota would like you to consider it as a ‘mainstream’ choice, rather than an exotic or premium alternative.

Apart from its efficiency, the Auris struggles to keep up with the mainstream class leaders for driving thrills, performance and quality. The styling is a big improvement over the old Auris and Toyota’s reliability record is enviable, but that won’t be enough to tempt buyers who are after something a little more thrilling and upmarket.

However, for drivers with a no-nonsense, no-frills approach to their family motoring, the Auris Hybrid makes sound financial and practical sense – particularly for company car drivers.

The Toyota Auris Hybrid ploughs a lonely furrow as a mainstream family hatchback with a hybrid powertrain. Although you can now get a Volkswagen Golf or Audi A3 with such an engine, those cars are focused more on dynamic thrills and are much more expensive as a result.

This is the second generation of Auris Hybrid. The first arrived in 2010 as a latecomer to the old shape Auris line-up, and was built alongside the other cars in the range at Toyota’s Burnaston plant here in the UK.

The current Auris was revealed in 2012 at the Paris motor show, with sales starting in early 2013. It’s based on Toyota's MC platform that also underpins a four-door version still known as the Toyota Corolla in Japan, but here in the UK we’re only offered the five-door Auris hatchback and its Touring Sports sister model. The Auris range is still built at Burnaston in Derbyshire. 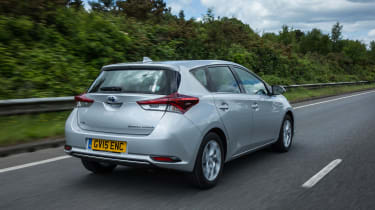 The Hybrid version uses Toyota’s familiar Hybrid Synergy Drive (HSD) set-up from the Prius, featuring a 1.8-litre petrol engine, 650v electric motor and nickel metal-hydride batteries. The only available transmission is a constantly variable (CVT) automatic, and this set-up allows for the lowest CO2 emissions in the class and some seriously impressive fuel consumption figure.

If it all still sounds a little ‘alternative’, it’s worth remembering that with millions of Toyota hybrids already on the roads around the globe, the technology is tried and tested.

Originally you could only buy the latest Auris Hybrid in Icon or Excel trim, but the hybrid powertrain is now an option across the entire Auris range.

The entry-level is therefore the Auris Active Hybrid, while the Auris Excel Hybrid is the range-topper. In between, there are trim levels called Icon, Business Edition and Design, offering increasing levels of equipment and comfort.

New Golf BlueMotion is Volkswagen's most economical family hatch yet. We pitch it against eco models from BMW and Toyota
Toyota Auris Hybrid 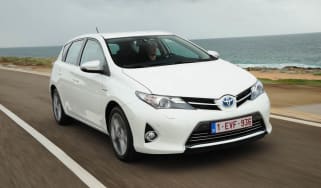 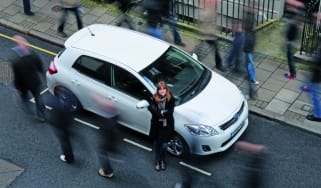 Hassle-free petrol-electric hatch has taken the stress out of everyday driving – and we’re going to miss it...
Skip to HeaderSkip to Content