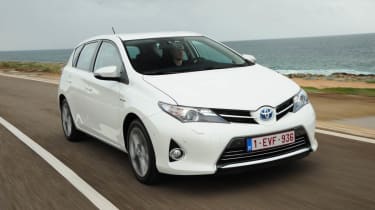 The new Auris is a significant step up in terms of efficiency, style and practicality over the car it replaces. It’s better to drive, too, but a clunky CVT gearbox means it still can’t hold a candle to a VW Golf or Ford Focus when it comes to driving fun. Toyota deserves praise for making a step in the right direction, but this car is still some way behind rivals.

The old Toyota Auris was just a car for getting from A to B. It was well suited to its function, yet lacked any real excitement. Enter the new model, featuring a more dynamic look and, says its maker, a bit more driving fun.

We know Toyota is still capable of making thrilling cars – the GT 86 proves that – but can it infuse the family hatchback with the same sense of entertainment?

Toyota decided to start with the looks. Gone is the old Auris’ shapeless, dumpy and bland styling. In its place is the brand’s new ‘keen look’ design language, which you’ll see on everything from the new RAV4 to the next-generation Verso compact MPV.

The result is a more athletic look, with a lower Toyota badge and an upward-angled grille and headlamps that emphasise the car’s width. A rising beltline and sloping roof lead back towards chunky light clusters that help draw the rear of the car together.

Inside, there’s been a clear focus on simplifying the design and improving quality. So you get lots of straight lines and more luxurious materials. Yet while they look good, a lot of the surfaces still feel a bit hard and cheap to the touch. Our top-spec car’s classy silver details and sophisticated white and blue instrument lights give the Auris cabin a premium feel it lacked before.

And before you even set off, you can tell Toyota’s engineers have tried to make this car feel sportier. The driver’s seat is now 40mm lower and the angle of the steering wheel has changed. It feels a lot more comfortable than before, too, thanks to very supportive, well bolstered seats.

Drive the Auris Hybrid through some corners and it feels instantly more impressive than the old car. Body control is good and there’s a bit more weight to the slightly more responsive steering.

Nevertheless, the experience still feels a bit disconnected. The new model is definitely a big improvement on the old Auris, but it’s still no driver’s car.

There are steps forward in other areas, too. The previous Hybrid’s boot was around 120 litres smaller than that of the standard Auris, due to space taken up by the batteries.

In the new Hybrid the batteries sit under the rear seats, so it’s the same size as in the rest of the range: 360 litres. The latest car is more efficient, too – but not because of any tweaks to the hybrid powertrain.

The 1.8-litre petrol engine and electric motor pairing still makes 134bhp, yet thanks to revised aerodynamics and a reduced kerbweight, the Auris now returns 74.3mpg fuel economy and emits only 87g/km of CO2. That’s better than the old car’s 70.6mpg and 93g/km.

The same drawbacks remain, though. Power is sent through a CVT gearbox that is noisy and unresponsive. This hampers refinement, which is a shame considering that ride quality is actually much better.

Our car was a £21,745 Excel model, with 17-inch alloys, cruise and climate control, heated seats plus park assist. The pick of the range will be the £19,995 Icon, which is almost £2,000 cheaper than the least expensive Prius.