Hassle-free petrol-electric hatch has taken the stress out of everyday driving – and we’re going to miss it... 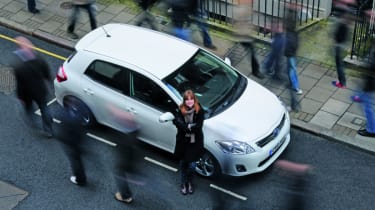 Meet the perfect antidote to the stresses of life! Our Toyota Auris HSD  demands a relaxed approach if you’re to make the most of its eco-friendly hybrid drivetrain.

So, while my colleagues race through the traffic around our central London office, with their blood pressures heading into the stratosphere, I emerge from every trip more relaxed than I was at the start! Sadly, as the Auris is now leaving the Auto Express fleet, I am bracing myself for a more frenetic future commute...

Of course, when I mention I’m running a hybrid, the question on everyone’s lips concerns fuel consumption. So, how did I get on with the HSD? In isolation, its 42.8mpg sounds average at best – after all, Toyota claims 70.6mpg should be possible.

But to put my figure in perspective, just look at the HSD’s predecessors. Before I took charge of the green machine, I tried the 1.33-litre petrol Auris, swiftly followed by the revised 1.6 SR version. They returned 27.5mpg and 30.1mpg respectively! And before anyone accuses me of having a lead right foot, my driving is virtually confined to the gridlocked streets of south-west London.

When I did break free of the city limits, the hybrid performed well. With a large battery in the back, it has a smaller boot than usual (down from 354 litres to 279 litres), but it still coped well with airport runs and a Christmas trip to see relatives in Somerset.

As I reported in Issue 1,147, the Toyota performed admirably on the Future Car Challenge – an event designed to test economy, not pace. By driving carefully, I achieved 71.4mpg for the 60-mile Brighton to London trip.

Even if you’re less restrained, it’s a comfortable and refined motorway cruiser. But the CVT box holds revs high under hard acceleration, which can make merging with fast traffic on slip roads a raucous experience. Friends and relatives were impressed by the technology under the skin. They all wanted to find out more about how the car works and what it’s like on the road. In reality, it feels pretty normal. You do have to adapt your driving style to make the most of its battery power, and adopt a light-footed approach in town. But the most obvious differences are the eerily quiet cabin at low speeds and noisy engine under full acceleration.

The great comfort and relaxed driving experience aren’t the only aspects of ownership that make life easy. The five-year warranty (eight years for the battery) and the fact the HSD is exempt from road tax cut the costs and stress usually associated with running a car – especially in London, where it also escapes the £10 daily Congestion Charge. I know I’ll miss the easy life once the Auris has gone...