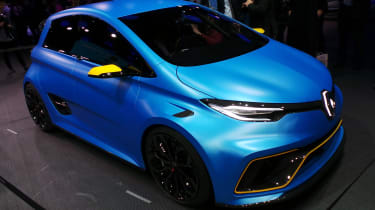 Renault has a history of using its Renaultsport department to create crazy concept cars, and at this year’s Geneva Motor Show the company has followed up the mad Espace F1 and Twizy F1 with a new ZOE concept using the firm’s Formula E technology.

Two electric motors are on hand to deliver 456bhp – almost 200bhp more than governed 270bhp limit of a Formula E single seater. There’s also up to 640Nm of torque available, and power is supplied by a 40kWh battery pack. 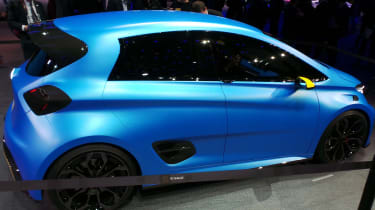 With this powertrain technology on-board, Renault claims the ZOE e-sport manages 0-62mph in 3.2 seconds, and it takes less than 10 seconds to reach its limited top speed of 130mph.

With that heavy electric powertrain and battery pack in place, Renault has gone to extreme measures to try and keep the ZOE e-sport’s weight down. The bodywork is made from carbon fibre, while the steel roll cage incorporates Kevlar panels. Despite the diet, the ZOE e-sport still comes in at 1,400kg.

A wider track is combined with a lower rider height and double-wishbone suspension front and rear, complete with four-way adjustable dampers. 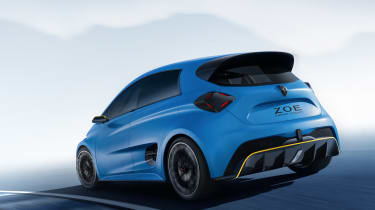 Plenty of aerodynamic trickery is woven into the all-carbon body. A large air dam and splitter set-up is found at the front of the car, while the ZOE e-sport also features a flat floor and large rear diffuser. Gaping tracts in the rear doors, a large rear spoiler and 20-inch centrally-locking diamond cut aluminium wheels complete the racecar inspired look.

In the cabin, two large Recaro bucket seats with race harnesses are found, alongside a rectangular steering wheel and a square dashboard display used to adjust powertrain settings. A new, de-cluttered concept interior design with lashings of Alcantara and angular switches and vents is employed.

What do you think of the ZOE e-sport? Let us know below...

Welcome to our Geneva Motor Show hub page, scroll down for all our Geneva content...
Affordable Electric Car of the Year 2020: Renault Zoe 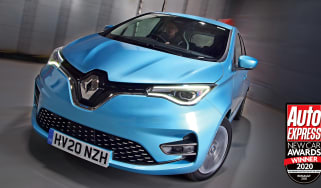 The Renault Zoe is the 2020 Auto Express Affordable Electric Car of the Year, with the Honda e and Kia e-Niro commended
Renault Zoe - Best electric cars 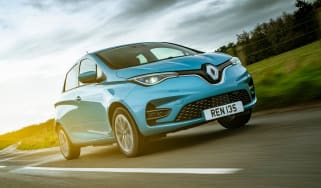