With the death of the Grand Scenic, it falls to Renault's passenger-carrying van to cater for large families 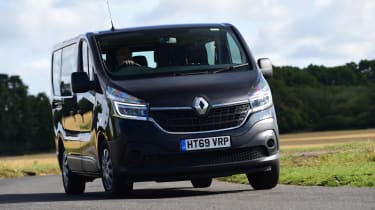 The Renault Trafic Passenger can't hold a candle to the defunct Grand Scenic for style, but if you need the ultimate in carrying capacity in a vehicle that can withstand the punishment that a large family can dish out, then it's a strong contender. Top-spec Space Class versions are plush but expensive, yet the basic Business model has the work-hard appeal of a van that's substituted cargo for passengers.

When Renault launched the last Scenic and Grand Scenic MPVs, designer Laurens van den Acker admitted that they were a last roll of the dice for the company's people carriers. Four years later, and both models have disappeared from UK price lists, and Renault has succumbed to customer demand for SUVs.

While the five-seat Kadjar SUV offers an alternative to the Scenic, where do you turn if you want a Renault with seven seats? Well, the only answer is this, the Renault Trafic Passenger. As the name suggests, it's the people-carrying version of the Trafic van, and if ultimate carrying capacity is your requirement - be it for people, luggage or both at the same time - then it's a solid choice.

Compared to the flowing lines and pseudo-SUV styling of the last Grand Scenic, it's certainly not going to win any beauty contests. Its one-box shape is pure function over form, although a facelift in 2019 did add C-shaped LED daytime running lights up front to give it a sharper face. That square body - which provides one of the biggest cargo areas in the medium-sized panel van market - means there's lots of passenger space inside, and there's room for eight seats inside in a 2-3-3 layout. The two rear rows are covered in hard-wearing fabric, while the outer chairs on both benches feature Isofix child seat anchor points. You could remove the seats in theory, but they're very heavy and you need somewhere to store them if you do take them out. 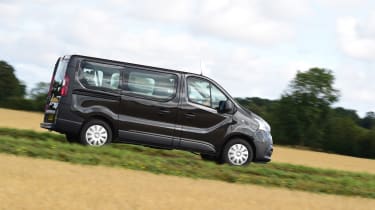 If you do need cargo space, then at least the seat backs fold flat to the seat bases to create a large load space. In reality the boot is big enough for most needs. Unlike some van-based MPVs, the Trafic at least has a parcel shelf that can be mounted in high or low positions.

Renault offers standard and long wheelbase variants (badged SL and LL respectively), while all models get a single sliding side door (a second sliding door is a measly £60 extra) and a top-hinged rear tailgate as standard. Standard kit is a bit threadbare on Business models, with the highlights being LED headlights, Bluetooth and a DAB radio, and it's fair to say that the fit and finish inside is designed to sustain a battering, rather than offer any particular style. With rubber floor coverings and lots of hard-wearing plastic on show, it's no wonder van-based MPVs such as these are popular as private hire vehicles.

On the road, the Trafic Passenger is pretty van-like to drive. That does mean you get a fantastic view of the road ahead thanks to a driving position that's taller than any SUV can muster, while a seat armrest and sculpted door card mean you have somewhere to rest your elbows while driving. There's plenty of body roll in corners, and the high centre of gravity discourages you from driving at anything more than a sedate pace, but the Trafic has a perfectly acceptable ride for carrying a large family around.

One highlight is the dCi diesel engine. The Trafic's most recent update in 2019 it ditch the 1.6-litre diesels in favour of a larger-capacity 2.0-litre unit. While power outputs remain largely unchanged (there's a choice of 118bhp, 143bhp or 168bhp versions), the increase in displacement has boosted torque, and even the 118bhp engine is a punchy performer. The six-speed gearbox offers acceptable gearchanges, but the motor pulls strongly enough that you only really need to work the box harder when you're carrying a full set of passengers.