New 2018 Rolls-Royce Phantom wafts in: is this the best car in the world?

It doesn’t happen very often but Rolls-Royce has launched a brand new car – the eighth-generation Phantom. Previous Rolls-Royces in recent years have been reliant on BMW underpinnings but the Phantom VIII sweeps in a new bespoke scalable platform. It will underpin every future Rolls – the next Ghost saloon, Wraith coupe, Dawn drophead convertible and the Cullinan SUV.

Compared to the outgoing model, the new Phantom is lighter but up to 30 per cent more rigid. There’s a new double-wishbone front axle and five-link rear axle with self-leveling air suspension and even four-wheel steering, and there’s a new piece of technology to make Rolls-Royce’s famous ‘Magic Carpet Ride’ even more floaty. Called ‘Flagbearer’ the new tech uses a stereo camera system integrated into the windscreen – it scans the road ahead and adjusts the suspension accordingly at up to speeds of 62mph.

Despite being lighter than before more than 130kg of sound insulation has been added, plus a double skin alloy floor and bulkhead, and new tyres called ‘Silent Seal’ – they feature a foam layer that are claimed to reduce tyre noise by 9db. 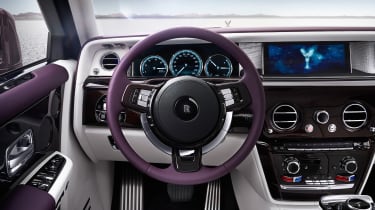 As ever with a Rolls-Royce the main event is the interior. In the back the Phantom VIII retains the outgoing model's slightly Art Deco styling and minimalist feel – picnic tables and TV screens are hidden away and appear at the touch of a button. There’s also a new centre console that includes a drinks cabinet with whiskey glasses and decanter, champagne flutes and a coolbox.

There are heated seats and armrests and different seat configurations available – but all configurations have the rear seats angled inwards to preventing occupants ‘straining their necks’, according to the firm. An Extended Wheelbase version is offered with an extra 220mm added to its length.

Up front, though, is where the real changes lie. Rolls calls it ‘The Gallery’ rather than a dashboard – gone is a the traditional great slab of wood across the upper part of the dash and in its place is a large window pane. In front of the driver sits a 12.3-inch TFT screen displaying speed, power reserve, fuel and temperature levels plus information such as sat-nav and driver assistance data. The car’s infotainment system appears and disappears at the touch of a button, too. Behind the glass owners can choose from a selection of Rolls-Royce designs or commission their own works of art and design the in-built clock too.

Visually, the new Phantom differs from the outgoing model most significantly at the front, taking key design themes from the 2016 103EX – Rolls-Royce’s first ever concept car. The famous Pantheon grille is larger than before, while whole front is far more curvaceous and flowing than the upright Phantom VII. The centre opening coach doors remain but this time they close electrically when the door handle is touched. 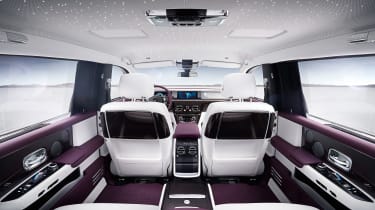 Under the bonnet lies a new engine, too. It’s still a 6.75-litre V12 but it now features two turbochargers, and develops 563bhp and 900Nm of torque. It’s paired up to a new satellite aided eight-speed automatic gearbox. Rolls-Royce has also added a suite of safety tech including an alertness assistant, a four-camera system with a panoramic view, active cruise control, pedestrian warning and cross-traffic warning. 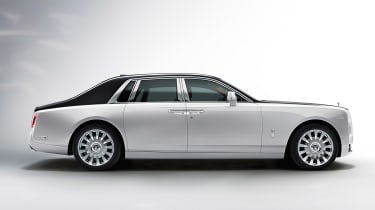 Click on the gallery above to see more of the new Rolls-Royce Phantom.