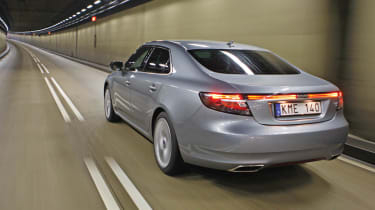 UK drivers have a soft spot in their hearts for Saab, and that’s unlikely to change as long as it keeps on building quality cars. The new 9-5 shows it is on the right track and still capable of producing solid saloons. The cabin materials need working on, but in terms of comfort and style, the 9-5 looks a real alternative to the established players.

Victor Muller, the chief executive of Spyker Saab, is the man everyone would like a piece of at the moment. In a world exclusive, Auto Express has not only secured an interview with Muller, but we’ve been for a drive in his company car – the eagerly aniticipated 9-5!

Saab’s worldwide sales fell 58 per cent in 2009 when it shifted less than 40,000 vehicles – not good for a brand capable of selling at least 120,000. But the Spyker takeover means there’s light at the end of the tunnel.

“Now we’re independent, our next four models are paid for,” explained Muller. “And I am committed to returning Saab to its roots, while at the same time bringing the brand up to the level of quality and respect enjoyed by the Germans.”

The boss’s own pre-production 9-5 is finished in Aero trim and is powered by a 296bhp 2.8-litre turbo V6 supplied by Holden, the Australian division of former parent General Motors. It also has the company’s superb XWD four-wheel-drive system, complete with electronic rear differential.

It’s a package that works well, and performance is impressive for a large car – 0-62mph takes an estimated 6.7 seconds, while the top speed is limited to 155mph. Already, there’s virtually no turbo lag when you plant your right foot – something that’s set to improve further when a twin-turbo version prepared by Saab tuning arm Viggen goes on sale. “The Viggen name should play a significant role in Saab’s future,” Muller said.

The new interior is a solid adaptation of the Vauxhall Insignia’s quality cabin. The dominant colour is a vibrant anti-freeze green – all instrument needles, some touchscreen sat-nav buttons and ambient lighting around the cabin shine with this traditional Saab shade.

Purists will be disappointed to see the firm’s trademark ignition barrel by the gearlever has been replaced by a push button on the dash. The manual handbrake has gone, too – all 9-5s are now fitted with an electro-hydraulic set-up.

The newcomer is the most striking Saab in years. It’s 18cm longer than the Insignia with which it shares a platform, and is larger than the Audi A6 and BMW 5-Series. Inside, there’s plenty of knee and headroom for two six- footers to sit behind one another.

Saab sees the 9-5 as the first step on the ladder, but it needs more new models. Firstly, a range of Spyker Saab personalisation packages will be available. The 9-5 estate will come in 2011, followed by a 9-4X crossover and a new 217bhp turbo 2.0-litre petrol engine.

There will also be a high-performance Viggen version of each new model. And that’s not all. Muller signed off by showing us an image of a new compact hatch to rival the Audi A3 and BMW 1-Series. It looks stunning and should give Saab’s rivals something to worry about.