Is it a bird? Is it a plane? No, it's SEAT's new Altea, a sporty mini-MPV that the Spanish firm has declared is the world's first MSV. 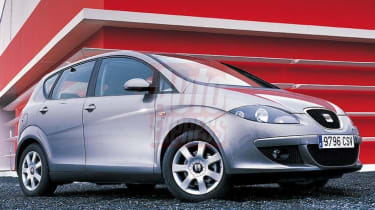 Blurring the traditional class boundaries can be dangerous, as Renault's ill-fated Avantime proved. SEAT's attempt has been altogether more successful, but questions remain about the true validity of the car. Will buyers be drawn by its sporty chassis and versatile interior? Time will tell.

Is it a bird? Is it a plane? No, it's SEAT's new Altea, a sporty mini-MPV that the Spanish firm has declared is the world's first Multi Sport Vehicle, or MSV. The unusual five-door machine is designed to mix its sporting character and handling with an airy, practical cabin.

It's hard to get a grasp of the concept from pictures alone, but imagine a Honda Jazz that's been pumped up by 50 per cent, and you've pretty much got it. Interior space is excellent, and there's a commanding, easily adjustable position from an excellent, high-back seat for the driver.

In the rear, occupants have plenty of knee and shoulder room, as well as masses of foot space under the front seats. There's excellent access through the big door openings, and although the rear seats are not removable, they flip and fold into the footwells. Add the boot's raised floor, which makes room for a generous hidden loadspace, and the result is a completely flat loadbay. Finally, SEAT's designers have included two parcel shelves, one of which is hollow for handy oddment storage.

SEAT claims top-level safety for its new model, which is based on the new VW Golf chassis. All versions have six airbags (front, side and curtain) plus ABS, ESP and traction control. The base Reference model gets air-con, tinted glass, chunky 16-inch wheels and a six-speaker CD tuner with a multichanger in the central armrest. For the plusher Stylance trim, alloy wheels, climate and cruise controls, plus a trip computer, are added. Offering an even racier feel, the Sport spec features 16-inch alloys, uprated suspension and superbly designed sports seats. Topping the range is the Sport Up, which combines the Sport and Stylance trims and adds a distinctive bodykit. Four engines will be made available from launch - 102bhp 1.6 and 140bhp 2.0-litre FSI petrol units, as well as 105bhp 1.9 and 140bhp 2.0-litre diesels. The smaller engines get a five-speed manual gearbox, while the 2.0-litre versions have six-speed transmissions. There is also the option of SEAT's excellent six-speed DSG dual-clutch gearbox on the 2.0-litre TDI, and it was this engine, albeit mated to a six-speed manual, which we drove first on the roads around Barcelona. It had plenty of urge and felt decently refined on the motorway, but the powerplant was unacceptably noisy when pressed.

With only 1,200 miles on the clock, the unit was very tight, so perhaps that was to be expected. Even so, a senior SEAT engineer confessed that Volks-wagen's PD offerings were noisier than rival Peugeot diesels.

The less powerful 1.9-litre's refinement is a better bet, but it can't match the 2.0-litre's superior emissions figures. In contrast, the base 1.6 petrol model is beautifully quiet. Unfortunately, it is also virtually gutless. Indeed, Seat sources admit it just isn't powerful enough when the car is fully loaded. As a result, the torquey 2.0-litre FSI powerplant is our choice. But that's the bad news over. The rest of the Altea is first-rate. It has a sporting but supple ride, accurate and direct steering - even though it's a little light - and excellent brakes.

It's also extremely manoeuvrable with a tight turning circle. And despite being tall, the Altea corners with very little roll. If you think you've entered a corner too quickly, stay on the power and it carves through confidently.

Who will buy it, though? Anyone after a sporty family car who finds models like the VW Golf too small should take a look. The Altea will appeal greatly at the school gates, suiting young parents who don't like the style of a conventional mini-MPV.