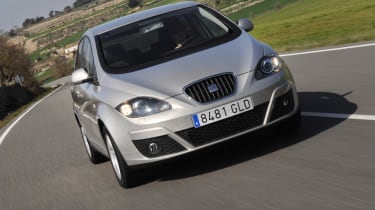 The Altea Sport may not be the first choice for many family car buyers, but for those who enjoy driving, it ticks all the right boxes. Add to that a great ride and handling balance, a smooth and economical diesel and performance figures that make it one of the quickest models in its class, and there’s much to recommend it.

It’s being tipped as the perfect car for those drivers who don’t want to give up the enjoyment of driving, but have a growing family to transport!

As with the Leon hatch, the SEAT Altea has been given a mild facelift as bosses make a concerted effort to improve the range. It gets a new grille, lights and bumpers as part of a package of enhancements that also sees upgrades being made inside.

The five-seat Sport model driven here is a new addition to the line-up. It’s marked out by its racy 17-inch alloy wheels and dark privacy glass. Inside there are further improvements, including sports seats – these aren’t the most figure hugging, but do give good lateral support.

Dashboard plastics and switchgear are improved over earlier models, and it’s easy to get a comfortable position behind the wheel.

Those sitting in the back won’t have much to complain about, either, with good legroom and comfortable seats. There’s also a large boot that offers more than enough room to accommodate the essentials of family life.

On the road, the Altea Sport feels secure, thanks to the new sports suspension. The ride is firm, but never harsh, and overall the car handles well for such a tall vehicle. Also new to the model is the common-rail 170bhp 2.0-litre TDI diesel engine, which propels the MPV from 0-62mph in 8.5 seconds.

Even so, the SEAT is capable of returning 50mpg. And thanks to the long-legged six-speed gearbox, the car is refined and quiet at cruising speeds.

For those who can’t bear to be subjected to a life of dull but worthy family transport, the new Altea Sport could be the perfect pick-me-up.

Rival: Citroen C4 Picasso 2.0 HDi VTR+ With a 20bhp deficit to the Altea, the Citroen can’t match the SEAT for performance. It’s great value, though, and the quirky design means it’s worthy of consideration.