When is an MPV not just an MPV? When it’s a four-wheel-drive performance crossover, says SEAT. 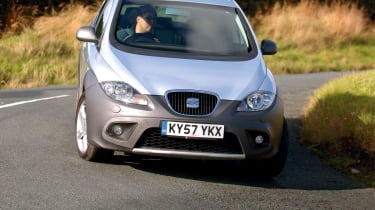 Off-road MPVs aren’t a new idea. Renault launched the Scenic-based RX4 in 1999, but it didn’t prove particularly popular. Yet in the current climate the Altea Freetrack 4 makes sense, especially for buyers wanting something a little different from a standard SUV. It’s capable in the rough, but offers impressive on-road performance, too. Our only concerns are the relatively high price and the lack of versatility in the cabin.

That’s the claim the firm is making for its Altea Freetrack 4, which is on sale now. In fact, SEAT boldly describes the five-seater as three cars in one – with off-road capability, the space of a family estate, plus the hand­ling and performance of a hot hatch.

Based on the Altea XL, the Free­track 4 has plastic cladding on the wheelarches that flows into the chunky bumpers. There are also aluminium underbody protectors front and rear.

Compared to the standard car, the Freetrack 4 has an extra 40mm of ground clearance, and an electronically controlled four-wheel-drive system, which can send 50 per cent of the available power to the rear axle.

The car is surprisingly capable off road. Our test route sent us through thick mud tracks and rock-strewn inclines, and despite the absence of a low-ratio gearbox, the terrain proved no problem for the SEAT. In normal conditions, drive is directed entirely to the front wheels, and with its car-derived suspension, the Freetrack 4 is very much at home on tarmac.

Although the ride height has been increased, there’s little body roll in bends and there’s a sporty edge to the handling, thanks to responsive steering and a firm ride. However it’s comfortable enough on the motorway, despite some road noise at higher speeds.

Two engines are available, and both offer decent pace. There’s a 168bhp 2.0-litre TDI diesel, and the 2.0-litre petrol version which we tried. This 197bhp turbocharged unit certainly gives the Freetrack 4 a racy feel.

It’s free-revving and smooth, while a 0-60mph time of 7.5 seconds is rapid and defies the Free­track 4’s off-road looks. In-gear performance is also strong, thanks to the slick six-speed gearbox. However, as MPVs go, the Altea’s practicality could be better.

There’s decent boot and passenger space, but it lacks the storage and family-friendliness of people carriers such as the Citroen C4 Picasso. The SEAT is well equipped, though, with climate control, parking sensors and stability control all standard.

At £20,495, the Freetrack 4 isn’t cheap and faces stiff competition in the MPV sector. But as an alternative to an off-roader, it’s certainly worth a look.

Rival: Nissan Qashqai 2.0 It’s not as roomy, but the Qashqai is excellent on the road, and the styling is neater, too. Two or four-wheel-drive models are available, but what gives it an edge is the lower price tag and longer kit tally.