The SEAT Altea XL is a sporty-looking alternative to a family estate, and is great to drive and cheap to run 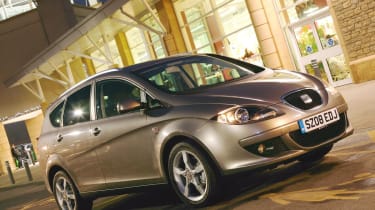 The SEAT Altea XL is a stylish rival to mini-MPVs like the Renault Scenic and Ford C-MAX. It's available with a range of punchy and efficient engines, is well-equipped and is one of the best cars in its class to drive. There's plenty of space for five adults and their luggage, with an extra 123 litres of luggage space over the standard Altea and rear seats that slide to provide more legroom or boot space as required. But it is only available as a five-seater and the rear seats don't fold flat, which means the Altea XL struggles to offer the flexibility of other MPVs. It's relatively cheap to buy, though, and benefits from low running costs.

The Altea XL corners incredibly well, the steering is responsive and there's very little body roll for such a tall car. The driving position is good, too, but the ride is a bit firm. There's a choice of two petrol and two diesel engines. There's the VW Group's 1.2-litre and 1.4-litre TSI engines, which produce 103bhp and 123bhp respectively. The 1.2-litre four-cylinder turbocharged engine is a bit small, but the larger petrol can manage the 0-62mph sprint in 10.6 seconds. Diesel buyers can choose between a 103bhp 1.6-litre or 138bhp 2.0-litre engine. All come with a six-seed manual gearbox, but the diesels are available with the VW Group's DSG automatic 'box as an option.

The 1.2-litres TSI offers a good mix of power and efficiency, with fuel economy of 49.6mpg and CO2 emissions of 132g/km. But the most economical version is the 1.6-litre Ecomotive, which is said to return 62.8mpg and emit just 119g/km – the same as the standard Altea Ecomotive – thanks to stop-start, brake energy recuperation and a gearshift indicator, which suggests the most efficient gear for every situation. Even the more powerful petrol engine returns 43.5mpg, which means all versions are relatively cheap to tax. There's also a range of fixed-price servicing deals to help keep costs to a minimum.

The SEAT Altea XL is designed as a sporty-looking rival to cars like the VW Touran and Renault Scenic. It's a taller and longer version of the SEAT Altea, and gets the firm's trademark wide grille, aggressive air intakes and sweeping lines. The main differences between the XL and standard Altea are the split tail lights and standard roof rails. On the inside, the dash is a bit plain and the interior plastics are a little below par, but everything feels very sturdy and well laid out. All versions come well-equipped.

The Altea XL is 18.7cm longer than the standard Altea and boasts an extra 123 litres of space - up from 409 to 532 litres, or 1,604 litres with the seats folded. The rear seats can be split and folded or slid forward and back to give more legroom or boot space depending on requirements, but they don’t fold into the floor. There's plenty of storage space, too, including big door bins, a large glovebox and cupholders. Entry-level models come with air-con and MP3 connectivity, while SE cars get 16-inch alloys, dual-zone climate control, a multifunction leather steering wheel and cruise control.

The Altea XL hasn't been crash tested, but the standard car received a five-star rating for adult occupant protection. All models come fitted with six airbags, ESP, ABS and traction control as standard. SEAT finished a disappointing 24 out of 30 in the 2012 Driver Power reliability survey, but there have been no reports of any major issues with the Altea or Altea XL. All engines are widely used across the VW Group, which should help keep risk of problems to a minimum.