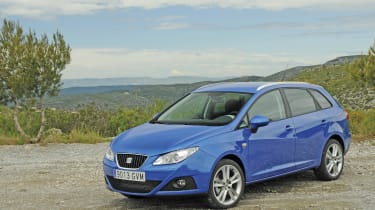 The ST is a logical and competent addition to the Ibiza family, giving style, a little extra space and an adequate drive. Unlike SEAT’s hot hatch line-up it’s not that inspiring, and when it comes to practicality, VW Group stablemate Skoda’s Fabia Estate is bigger and cheaper, too. Strangely, while bosses say there will be no Ibiza ST Cupra, the Czech firm will offer a hot vRS version of its Estate. Perhaps SEAT is missing a trick.

Three is the magic number for the SEAT Ibiza range. The new ST joins the five-door hatch and SC three-door as the third car in the line-up, and provides the stylish supermini with some useful extra space. The production version debuted at the Geneva Motor Show in March, and now Auto Express has driven it to see how it performs in the real world! The Ibiza has really benefited from SEAT design chief Luc Donckerwolke’s unique style. He’s the man who brought us the Lamborghini Gallardo, and the creased, sculpted body which sets that model apart among supercars transfers well to the Ibiza. This is also true on the ST.

The car measures 4.23 metres in length, and the extra 18cm of metalwork grafted on to the rear of the five-door hatch doesn’t harm the looks, either. A prominent crease which runs along the rear wing into the smart back light clusters appears to take some of the mass out of the extra metal.

Meanwhile, the steeply raked tailgate gives a more dynamic profile which at a glance is very similar to the Audi A4 Avant’s, albeit smaller. Matt silver roof rails are standard, unless you specify the optional sunroof.

Thanks to a design biased more towards aesthetics than practicality, the ST’s 430-litre boot doesn’t quite match the 480-litre capacity of its Skoda Fabia Estate stablemate. The SEAT’s load area is well thought out, though. Its tailgate opens wide and the low-set bumper lip makes it easy to load.

Minimal wheelarch intrusion means the boot is a very usable size. Plus, neat touches include elastic straps and netting to stop things from rolling around, hooks to hang bags from and a small tray beneath the parcel shelf to keep items hidden.

The rest of the interior is shared with the hatch, so retains the familiar mix of stylish design backed up by impressive build quality. The two-tone dash looks good and is made from quality soft-touch plastic, and the red dials add a sporty touch.

Access to the rear is slightly improved, as the back doors are 15mm longer than on the five-door. Once inside, headroom is quite tight for adults, though.

In the front, our car benefited from sports seats which are well bolstered at the sides, enhancing comfort. The driving position is great, due to a wide range of both chair and steering wheel adjustment. Engine options comprise two petrols and three diesels, including our car’s common-rail 104bhp 1.6. It’s tuned for economy and is not the most punchy powerplant, especially when combined with the long-ratio five-speed gearbox. A lot of revs are needed, as are frequent downchanges to keep the turbo on boost.

Our Sport model features a thicker anti-roll bar and stiffer dampers. These make the car handle well and give the steering a very direct, positive feel. But cornering agility is blunted by the ST’s extra 105kg over the five-door – even though all estates with more than 100bhp get the same XDS electronic differential which features on the Ibiza Cupra. The ride is very firm on broken surfaces and potholes, so for most people the softer set-up will be more suitable.