SEAT has revealed the limited Leon ST Cupra Carbon Edition, with fewer than 50 units heading to the UK 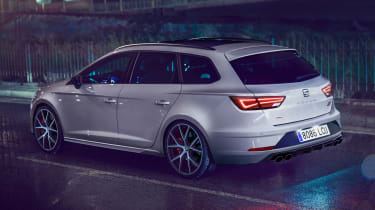 SEAT has revealed a new special edition Leon ST Cupra, on sale in the UK now and priced from £35,575.

It’s called the Leon ST Cupra Carbon Edition, and as the most expensive Leon to date - costing ever so slightly more than the limited edition Cupra R - fewer than 50 examples have been earmarked for Britain. 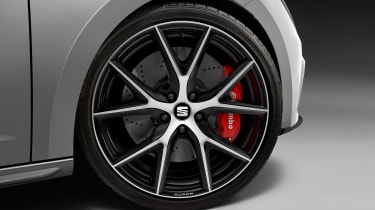 Unlike the regular Leon Cupra hatch, the ST estate hasn’t been affected by new WLTP fuel economy and emissions regulations, retaining its power output of 296bhp. The Leon Cupra hatch has been downgraded to 286bhp.

That means no changes to overall performance, and the Leon ST Cupra will still do 0-62mph in 4.9 seconds, advancing onwards to a limited top speed of 155mph.

This limited run Carbon Edition is kitted out with a wealth of new, sporty design tweaks, but it also gets some upgraded performance hardware as well.

At both the front and rear, new carbon-fibre aerodynamic appendages are found, such as the new, large rear diffuser. Carbon side blades are found on the car’s flanks too, while it rides on 19-inch alloy wheels. Housed behind them is a new set of Brembo brakes, while the look is completed with the addition of Cupra branded bucket seats in the cabin, quad rear exhausts, and exclusive Monsoon Grey paint.

Check out the best estate cars on the market right now…