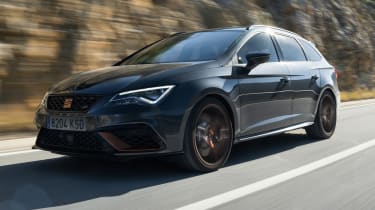 SEAT has unveiled the limited edition Leon Cupra R ST, which is set to be the fastest model from the brand to date. Sales begin in April, with only 150 examples allocated for the UK market, each priced from £37,975.

In standard format, the Leon Cupra R ST’s turbocharged 2.0-litre four-cylinder petrol engine produces 296bhp and 400Nm of torque. However, for an extra £500, SEAT will fit its optional Abt tuning pack, which boosts the power figure to 365bhp.

The VW Group-sourced engine sends its power to all four wheels via a seven-speed DSG transmission. With the optional tuning pack fitted, the Leon Cupra R ST will sprint from 0–62mph in 4.5 seconds; a 0.4 second improvement over the standard car. Top speed remains the same, though, at an electronically-limited 155mph.

Styling updates over the regular SEAT Leon include a reworked front bumper with copper-coloured intakes, a carbon fibre splitter, a panoramic sunroof, a carbon fibre diffuser with quad exhaust tips, new side skirts and a large rear wing. Abt-tuned versions also get unique badging on the rear hatch.

Inside, the Cupra R ST gets a pair of bucket seats, an Alcantara steering wheel, re-upholstered door cards, an eight-inch touchscreen display, a digital instrument binnacle, keyless entry and copper-coloured trim for the climate control vents and centre console.

Now read our review of the new Cupra Ateca. Let us know your thoughts in the comments section below…

The fourth-generation SEAT Leon now boasts a plug-in eHybrid option, which is available in the UK from just under £31k