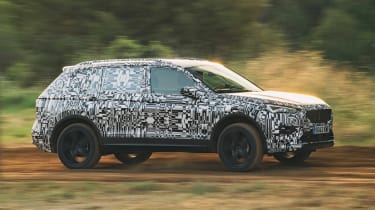 The SEAT Tarraco is shaping up to be a strong seven-seat SUV, offering just enough sportiness without compromising comfort. It blends this with more tech inside and practicality to push rivals in this sector. Pricing and efficiency will be key, but with SEAT’s sporty edge and sense of style, the signs are positive.

The Volkswagen Group’s rather predictable approach to new products means it’s now SEAT’s turn to offer a family-friendly seven-seatSUV. It’s called the Tarraco, and we’ve driven it in prototype form before it’s unveiled at the Paris Motor Show in October.

Think of this as SEAT’s rival to the Skoda Kodiaq and Volkswagen Tiguan Allspace. Tough competition, then, but SEAT has form when it comes to seven-seaters. The brand’s Alhambra MPV was a stalwart of the class for years, but with traditional MPV sales waning and seven-seat SUVs on the rise, the Tarraco is the car that aims to mix practicality and versatility with style. And it delivers.

Even in camouflaged form, you get a hint of how the new car looks – its proportions and the lines of the body. 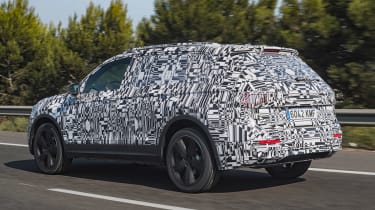 In the here and now, the Tarraco drives as you’d expect from a car based on the VW Group’s MQB platform, but is subtly different to its in-house rivals. It’s aiming to be the sportiest car in its class, and this shows. Responsive steering makes it feel pointy and direction changes are positive, while the chassis set-up controls roll well, giving a good level of agility for something so big.

However, this slightly sportier focus hasn’t compromised ride quality. Our test models weren’t equipped with the optional adaptive dampers, but on 19-inch wheels, it felt compliant – more forgiving than an Ateca, in fact. This is no doubt helped by the car’s extra weight and the longer wheelbase – making the ride less fidgety.

Our first taste of the Tarraco was behind the wheel of the 148bhp 1.5-litre TSI turbo petrol with a six-speed manual, which is a known quantity. It delivered adequate performance in a car this size (0-62mph takes a claimed 9.7 seconds) and strong refinement at speed.

But despite the slightly sportier set-up, it’s not all that quick due to the sizeable body mass. While many drivers won’t need more pace, if you do, the 187bhp 2.0-litre TDI is a strong performer. The 0-62mph dash takes 8.0 seconds – 4DRIVE offers good traction and more off-road ability than many owners will ever require, as we sampled. 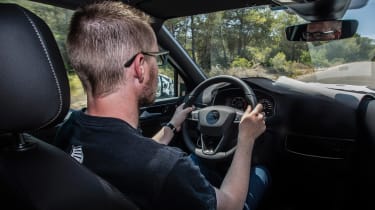 It’s not as refined as the petrol version, but the extra torque on offer gives more flexibility as it’s also paired with a seven-speed DSG automatic.

Any seven-seater has to offer flexibility inside, too. While the Tarraco will come in both five and seven-seat versions, in the latter the room in the third row is adequate but mainly for children. With the third row folded, there are 700 litres of luggage space on offer – which increases to 760 litres if you go for the five-seat model.