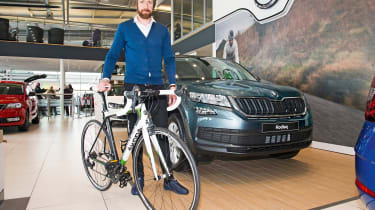 Few brands are as closely related to cycling as Skoda. In fact, before it built cars, Skoda started out making bicycles under the Laurin & Klement badge in 1895. Now, however, you can’t watch a single stage of the annual Tour de France without seeing a skilfully driven Skoda Superb leading the peloton past throngs of excited supporters.

And like Skoda, only a scattering of names are as closely related to the sport as that of Sir Bradley Wiggins: five-time Olympic champion, Tour de France winner and one-hour time trial record holder. So it makes sense for Wiggins to be an ambassador for the brand, and we caught up with him alongside a brand new Skoda Kodiaq at Mitchell Skoda, in Chester, to quiz him on all things car (and bike) related.

As soon as we arrive, we’re ushered into a back room behind the workshop to wait for Wiggins. He’s spent the morning surprising customers by handing over the keys to their new Skodas – a treat rustled up by Mitchell Group MD Mark Mitchell. Can you imagine signing the paperwork on your second-hand Yeti, only to be confronted by one of cycling’s most heavily honoured riders? 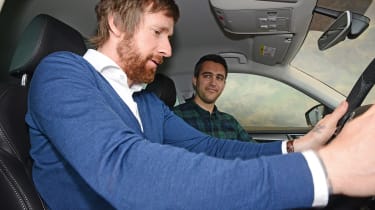 After the formalities, we quickly get down to business – but as Wiggins is so famous for cycling, has car ownership passed him by? “You can’t be without a car these days – or at least I certainly couldn’t,” Wiggins tells us. “I use the car a lot. I drive the kids half an hour to school every day, and I’ve always been commuting around the country. I used to live in London and drive to Manchester for the training sessions for the national team. So I’ve never been able to live without a car.”

He’s clearly not a petrolhead, however. Despite his success on two wheels, he insists he’s always been a cautious cyclist – and that translates to the way he drives. “I enjoy driving,” he says, “but I’ve never been a massive thrill seeker. I’ve never been a huge risk taker. To win you need to be the quickest, not take the most risks.”

Wiggins was raised in Willesden Green in north-west London in the eighties, and he remembers his dad’s big white Mercedes fondly. “He had a Rolls-Royce too,” Wiggins tells us. “I remember distinctly sitting in that.”

But his first car was a more modest affair, and he didn’t choose it for its big wheels or powerful stereo. “I had a Ford Fiesta. But only because it came with two years’ free insurance,” he recalls. “I was a professional cyclist at 18, so I used to get stung on the insurance. But I’ve never had points on my licence, and I’ve only had one accident.”

Now he drives a Skoda (of course), prioritising space and comfort over performance or handling. “More recently, I’ve found myself liking big, comfortable cars,” he says. “As I’ve got older, they just seem more practical. 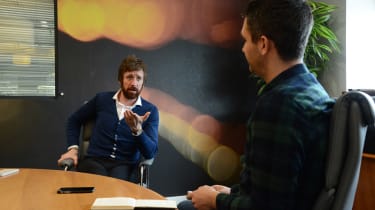 “My son plays a lot of rugby and he needs a car that he can get changed in afterwards. I’ve got two huge dogs who are more like Shetland ponies, and everyone in my family cycles, so I need to get all of them and their kit in at once.

“I take my kids to school and everyone’s got Range Rovers – I turn up in my Kodiaq. It’s good to be different.”

We ask Wiggins what Skoda means to cycling, and whether he can imagine a Tour de France that isn’t emblazoned with Skoda logos. “I think Skoda has been huge for cycling – not only the Tour de France, but then Tour of Britain and the Women’s Tour of Britain as well. It’s almost synonymous with cycling, it’s become such a big part of it. As the sport has grown, so has Skoda.”

Finally, we quizzed Wiggins on what he’d say to someone who wants to follow in his footsteps. “When I started cycling it was because I was in love with the sport,” he tells us. “You wouldn’t ride from London to Northampton and back if you didn’t love it…”