Does Czech brand's most environmentally friendly Fabia ever add up on the road? We get behind the wheel to find out. 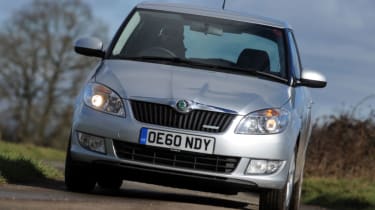 We can't knock the GreenLine's strong fuel economy and good intentions, but the overall driving experience is lacking. Although it's faster than other eco models from the VW Group, the sluggish performance would make the Fabia difficult to live with day to day. We'd go for the 1.6 TDI instead - it's cheaper, easier to drive and will still return well over 60mpg, while £20 a year road tax is a small price to pay.

It's a green party at Skoda! The Yeti we drove last week might be the latest addition to the line-up, but the updated eco-Fabia is Skoda’s most environmentally-friendly car ever - and we’ve driven it.

In both hatch and estate guises, the Fabia emits just 89g/km of CO2, and with a combined economy figure of 83.1mpg, Skoda claim that you could drive it from London to Prague - that’s 932 miles - on a single tank. Other benefits include free road tax and exemption from the London Congestion Charge.

It’s certainly an impressive technical achievement, and there’s plenty of new technology on board to helping to cut every gram possible. The new engine, a 1.2-litre three-pot diesel, comes with 74bhp and 180Nm of torque, and is so efficient that there’s no need to change the gearing of the standard five-speed ‘box. That means the Fabia is over a second quicker off the line then both the Seat Ibiza Ecomotive and Polo Bluemotion, its sister models, taking 12.6 seconds to complete the benchmark 0-62mph sprint.

When combined with stop/start, lighter 15-inch alloys fitted with low rolling resistance tyres, and brakes which feed power back to the battery, and it’s soon easy to see how the Fabia manages to post such fantastic economy figures. Yet apart from lowered suspension, it also looks virtually identical to the normal variant, and the tall five-door bodyshape means the interior is as practical as ever.

However some of the changes are less welcome, inlcuding the enormous rear spoiler - which cuts aerodynamic drag but adds little to the styling. The car also feels fairly spartan from behind the wheel - that’s partly an attempt to save weight - but the abundance of dark plastics makes it rather dreary.

The engine needs a lot of encouragement just to keep up with other traffic, let alone overtake, and because it needs to be driven hard, you’re unlikely to match the claimed stats on the road. It’s not the most refined unit either, and becomes intrusively noisy at higher revs, making longer journeys tiring.

The Fabia's ride is surprisngly good, though. Of course, it's not just what you drive, but the way you drive that makes all the difference to fuel economy, and the Fabia’s sluggish powerplant means maximising the Skoda's efficiency is difficult.

Rival: Ford Fiesta ECOnetic As with the Fabia, Ford's greenest car is very cheap to run. Sharp styling, nimbler handling and a bigger 1.6-litre diesel make it a better all-rounder - but it does cost £2,000 more.