Pictures from the Paris Motor Show, plus full details on the new two and four-seater Smart cars 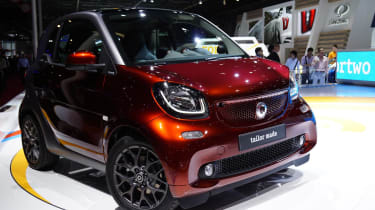 The world’s most recognisable city car is back, with the public debut of the new Smart ForTwo and Smart ForFour models in Paris – and the brand says it’s kept everything that was good about the old car and changed everything that wasn’t. The new models are due on sale in November, with prices starting at around £11,000.

At 2.69m long, the ForTwo is just as compact as before ­(the ForFour is 3.49m long), but Smart has addressed criticism of the old car's rock-hard ride and slow-witted gearbox by fitting all-new suspension and offering standard five-speed manual or optional six-speed dual-clutch transmissions.

The new ForTwo and ForFour get near-identical styling, unlike in the previous generation. What’s immediately obvious is that the cars look a lot less upright and top-heavy, particular the ForTwo. That’s down to a 100mm wider track and a slight decrease in height, by around 10mm. Meanwhile, the ForFour has a sloping roofline, to help create more of a sporty profile. 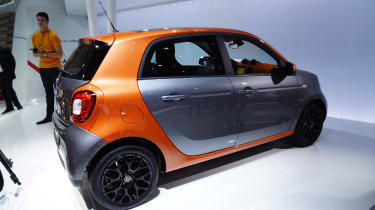 The contrasting Tridion safety cell remains, but otherwise it’s a whole new Smart design language. We’ve seen it before on concepts like the Forvision, Forstars and For-Us, featuring a honeycomb-patterned grille, large headlights and a high bonnet.

Buyers can customise their Smart with around 40 different combinations of body colour and Tridion safety cell. These include a matt white for the body and metallic orange for the cell.

There’s been a complete overhaul for the interior design, too. The dashboard and door panels are covered in a hi-tech mesh which Smart says feels a lot like the mesh you find in trainers. 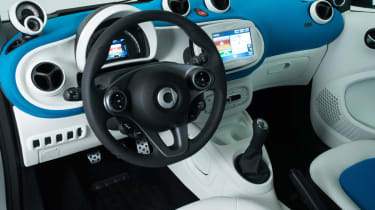 Inside, you’ll also find evidence of Smart’s joint project with Renault – the ForFour and ForTwo were co-developed with the new Twingo. Cars with the five-speed manual box get a Renault gearstick and the basic infotainment controls are the same as in the latest Twingo.

Buyers can connect a smartphone and keep it in a specially designed holder in the centre console, or upgrade to a proper touchscreen infotainment system. This includes things like sat-nav and can display data from apps on your smartphone.

With a rear-engined, rear-wheel-drive layout, just like the old ForTwo, Smart has managed to make good use of the space in the cabin in both the new ForTwo and ForFour. 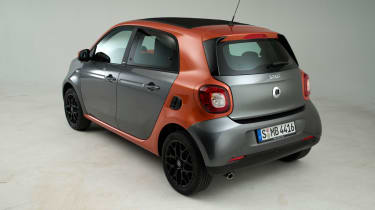 The two-seater has a 260-litre boot – compared with 230 litres in the old car – and the four-seater has 185 litres behind the rear seats. Fold them down, though, and the ForFour can hold an impressive 975 litres of luggage. With the front passenger seat laid flat, you can load items up to 2.22m long.

On a preview event back in February, we sat in the new ForFour along with three other adults, proving it’s set to be a usable family car. The doors even open nice and wide – almost to 90 degrees – to help make getting in the back easy. The ForFour gets a single-piece bootlid, but the ForTwo has a split tailgate, just like the outgoing car.

Two three-cylinder petrol engines are available from launch: a 70bhp 1.0-litre and an 89bhp 900cc turbo, also found in the new Twingo and the Clio.

The figures haven’t been finalised yet, but we expect more than 70mpg from each engine and CO2 emissions of around 90g/km. A few months after the initial launch, a 59bhp petrol will be added to the line-up. 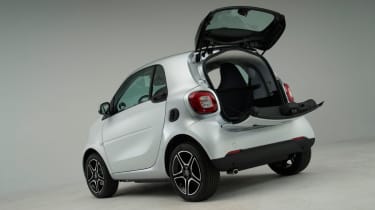 Smart ForTwo and ForFour: built for the city

Clearly, though, the ForTwo – and to a lesser extent the ForFour – need to work in crowded cities, so Smart’s engineers have worked hard to get the best turning circle possible: and a 6.95m kerb-to-kerb figure is the result. To give you an idea of how impressive that is, a black cab can do it in 8m.

In February, we were shown the ForTwo making a U-turn on a tight mountain pass that would have been a three-point turn in a Ford Fiesta. The ForFour, meanwhile, has a turning circle almost as tight as the old ForTwo. 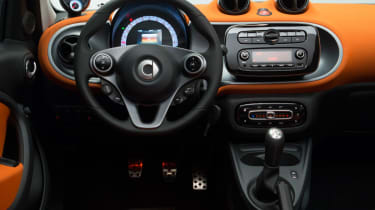 And driving around the well-worn streets of a city used to be a chore in the old ForTwo as every small bump and ridge jolted you around in your seat. Now there’s more travel in the suspension, while the front and rear springs have been designed to be more comfortable. Smart will offer a stiffer Sports suspension package, though, which lowers ride height by 10mm.

Those changes, along with the new gearboxes, should help the new Smart family feel much more grown-up. And there’s plenty of grown-up tech, too. Crosswind Assist is standard, intervening to keep you on course when you pass a lorry on the motorway, for example. Forward collision warning and lane-keep assist are both options. 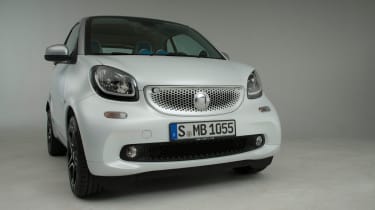 Following the launch of the ForTwo and ForFour, Smart will release a soft-top Cabrio version of the ForTwo. However, bosses are struggling to see the business case for a revival of the sporty Coupe and Roadster models. An all-electric version is a few years away, too, as Smart will continue to sell the current ForTwo Electric Drive.

Prices for the ForTwo haven’t been finalised, but expect it to start from around £11,000, with the ForFour just £500 more when the cars go on sale in November.

Tell us what you think of the new Smart cars on Twitter, on Facebook or in the comments section below.

Welcome to our Paris Motor Show hub page. Scroll down for all our Paris content...
Smart EQ ForTwo and EQ ForFour pricing