Off-road-focused SsangYong XAV SUV on the way in 2019, will be based on the Tivoli platform 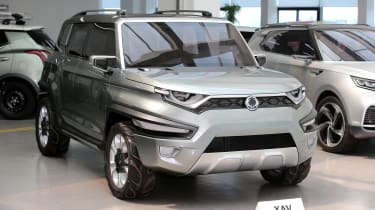 SsangYong will strengthen its model range over the next few years by introducing an all-new off-road-focused SUV based on the XAV concept, Auto Express can exclusively reveal.

The XAV was first seen at last year’s Frankfurt Motor Show, and a production model could boost the Korean company’s product portfolio to seven models by the time it lands in dealers by 2019.

Senior executives at SsangYong have been mulling over whether to build the XAV since it was first shown, but Auto Express can confirm a production model has finally been given the green light. Its arrival is expected to coincide with the brand turning a profit for the first time since it was bought by Mahindra & Mahindra back in 2011.

Development has only just begun, but we know the SUV will be based on a stretched version of the Tivoli’s platform and that the styling approach will be heavily influenced by the no-frills Mk2 Korando of the nineties.

The production car should measure around 4,400mm in length (longer than the XAV concept), although the exact packaging and proportions of the final model are still under discussion.

We do know its focus will be on off-road ability, so the chunky bumpers and skid plates, elevated ride height and short overhangs from the XAV should find their way on to the production model.

Being underpinned by the Tivoli platform means the latest-generation petrol and diesel engines will be fitted, although the Frankfurt show car featured a hybrid electric E-4WD system. This comprises a 2.1kWh lithium-ion battery and two electric motors mounted on the rear axle to give the option of four-wheel drive. SsangYong has previously expressed interest in introducing hybrid and even electric powertrains to its line-up, so a similar E-4WD system could make its way on to the production model.

What’s unlikely to be transferred from concept to showroom is SsangYong’s 3S-CUBE system. This set-up is designed to maximise off-road ability by using a sensing device and electric air-suspension to automatically adjust the ride height to suit the terrain.

Cost and complexity are likely to prevent the system from appearing on the production version, with bosses adamant that the final car needs to stick to SsangYong’s budget roots and value-for-money ethos.

The XAV won’t be the first all-new SsangYong to arrive by 2019. We’ll see a new Rexton SUV next year, while a fresh pick-up truck to replace the Korando Sports will follow in 2018. Arriving just ahead of the XAV in 2019 will be an all-new Korando mid-size SUV, which will also be based on an extended version of the Tivoli and Tivoli XLV platform.

Would you buy a prodcution version of the SsangYong XAV? Let us know below...