SsangYong is upping its pick-up truck game with a new ‘Q200’ model that’s better placed to compete with the growing glut of rivals. 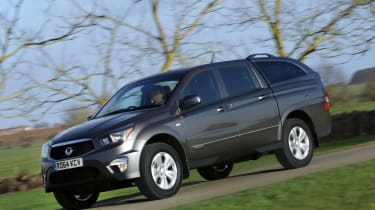 SsangYong will renew its entry in the booming one-tonne pick-up market in 2018 with the arrival of an all new model based on the next generation SsangYong Rexton SUV. The current SsangYong Korando Sports will be replaced by the new truck codenamed Q200 and Auto Express was treated to a sneak peek at the final design of the vehicle on a visit to SsangYong’s R&D centre at its Pyeongtaek plant near the South Korean capital, Seoul.

The first pictures of the Q200 truck and its Rexton SUV counterpart have yet to be released, but our viewing of both cars confirmed that the two models share common styling from the A-pillar forwards based on the lines of the LIV-1 concept car (pictured below) unveiled at the 2013 Seoul Motor Show. The Q200 is a larger vehicle than the Korando Sports and will not carry the Korando Sports name when it arrives in the UK, targeting established pick-up players like the Mitsubishi L200, Volkswagen Amarok and Nissan Navara.

Unusually for a European market one-tonne pick-up, the Q200 comes in short and long wheelbase form with the latter giving a usefully extended load area behind the double cab. The ‘short deck’ model is targeted at the ‘lifestyle’ pick-up market, with a wheelbase around 3,100mm and a 5,100mm total length, while the long deck version is positioned as the choice for business users with a 5,400mm total length from a 3,200mm wheelbase. 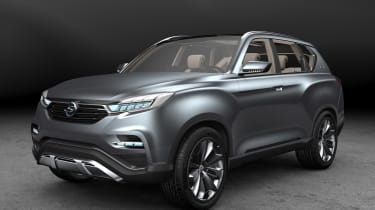 Inside, the Q200 gets the new interior design SsangYong has created for its Rexton and what seems a high quality effort in the SUV looks excellent by the less cosseting standards of the pick-up truck sector. The interior mock-up we were shown offered less by way of equipment than in the Rexton SUV version and a greater reliance on plastics in place of wood-effect trim and chrome, but the classy colour display screen in the instrument panel and the large central touchscreen remained. We were also told that the Q200 would be offered with SsangYong’s Around View Monitor (AVM) system to aid manoeuvring and a blind spot warning system.

The truck will be powered by the existing SsangYong Rexton powertrain with a standard 6-speed manual gearbox paired with a 2.2-litre 178bhp diesel engine. SsangYong may also offer the 7-speed automatic gearbox from the current Rexton or another Mercedes-sourced unit - the more advanced 8-speed auto that’s set to join the Rexton range by 2018. The Q200 will aim to further SsangYong’s reputation as a specialist in rugged off-road vehicles, with a selectable 4x4 system and a locking differential.

There’s no word on pricing yet but the Q200 will have a new name and a place in SsangYong showrooms in 2018, following hot on the heels of the Rexton that’s set to launch in 2017.

Do you think SsangYong’s new pick-up can deliver the goods in an increasingly crowded UK marketplace? Let us know in the comments section…