We drive the longer, more practical SsangYong Tivoli XLV in the UK, but is a crossover estate a niche too far? 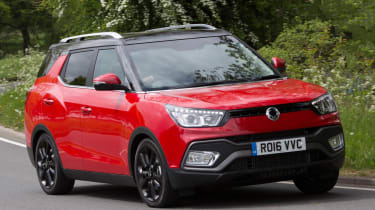 If the SsangYong Tivoli’s blend of practicality and value has got your attention, this larger XLV version could be worth a look as well. It doesn’t cost much more than the standard car, and it offers plenty of extra boot space for those who need it. This 4x4 automatic version should be avoided, though, as it’s not very economical and the gearbox isn’t a particularly good match for the noisy yet punchy diesel engine.

We’ve already tested the SsangYong Tivoli XLV on Spanish roads, but now we’ve had the chance to see how the big-booted crossover fares on British tarmac.

The standard Tivoli is one of the most spacious cars in its class, but this stretched-out XLV version gets an extra 245mm of bodywork, all of which hangs out over the rear wheels. Only the boot benefits from the added length, which now stands at 720 litres – although that is measured from the boot floor to the roof rather than the top of the rear seats. The load area on the standard Tivoli is 423 litres. 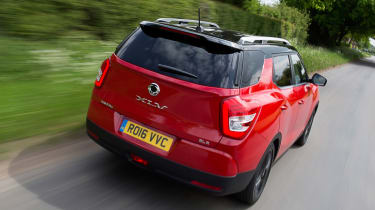 Our 4x4 model was fitted with a six-speed automatic gearbox, which doesn’t look like the best choice on paper. It only claims 44.8mpg economy, compared with 62.8mpg for the front-wheel-drive manual model. Plus the auto costs around £1,000 more to buy. It shifts smoothly enough, although it’s too keen to rev the noisy 1.6-litre diesel engine. There is a manual mode, but it can only be controlled using a tiny switch on the side of the gearstick.

SsangYong’s intelligent four-wheel-drive system will spend most of its time in front-wheel-drive mode anyway, so unless you need the improved traction, we’d go for the front-driven version with a manual box. 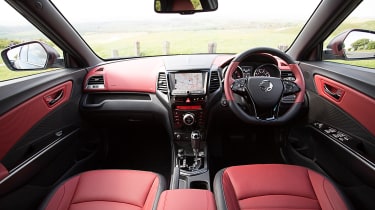 The extra bodywork over the back wheels isn’t really noticeable, so the XLV drives much like the standard Tivoli. Unfortunately, that means it has vague steering and lots of body roll. The ride is a bit bouncy, although it soaks up potholes reasonably well and the seats are comfortable.

The XLV is set to cost about £1,000 more than the regular Tivoli, but there’s loads of kit inside, with nav, dual-zone climate control, auto lights and wipers and leather trim all standard.