Ford is hoping for some small SUV success with the new Fiesta Active. We test it against the Citroen C3 Aircross and SsangYong Tivoli 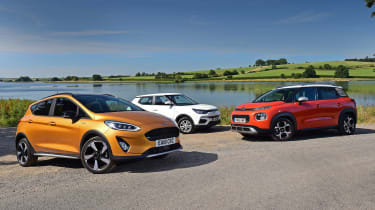 It’s fair to say Ford’s recent form in the small crossover class hasn’t been great. The EcoSport has led the way for the brand, but that car has been adapted to suit Europe from budget-focused origins.

The new Ford Fiesta Active could change things, though. It’s an attempt at injecting a bit more lifestyle appeal into the famous Fiesta supermini, so it should mix the hatch’s strong dynamics with more rugged looks and SUV-like appeal.

However, there are cars on sale that do this already, so entering this crowded area of the market means the Fiesta Active has a challenge on its hands.

We’ve lined up our current favourite small crossover, the Citroen C3 Aircross; this model, with its supermini underpinnings, has compact dimensions without compromising practicality or usability, at an affordable price.

Our final contender here is the SsangYong Tivoli. It achieved what the Fiesta Active is aiming to, having emerged into the sector back in 2015, offering space and affordability with enough kit to make it a viable proposition. It marked a big step forward for the Korean brand. 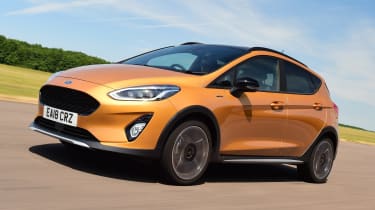 Ford’s Fiesta Active is more of a supermini than an SUV, but it has been modified to make it more appealing as a compact crossover. Here we test the Fiesta Active B&O Play model with Ford’s 123bhp 1.0-litre EcoBoost engine. It is priced from £19,695, making it the most expensive car here.

The standard Fiesta rides and handles wonderfully and the modifications to the chassis of this Active model haven’t changed those characteristics.

Its steering is still nicely communicative and direct for a small car, there’s a good level of grip and the Ford responds faithfully to your inputs. You can carry more speed than you might imagine, too, but that doesn’t come at the expense of comfort. 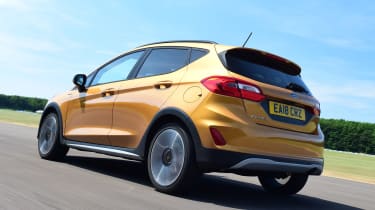 In fact, even on the standard 17-inch wheels, the suspension modifications mean the Active flows over the ground slightly better than even the regular car. The damping feels plush and fluid in a way that all Fiestas do; it’s rewarding and refined to drive at the same time, which is a great character trait to pull off.

The engine is a strong companion for the chassis as well. With 123bhp and 170Nm of torque, there’s enough performance here to make the car enjoyable. It’s fair to say it’s swift and was certainly sharper off the line in our track tests than the competition; the Fiesta sprinted from 0-60mph in 8.5 seconds. This was around two or more seconds faster than its rivals. However, longer gearing than the C3 meant the Fiesta wasn’t quite as quick in gear, even if it does deliver strong enough pull to not feel laboured when you’re coming out of towns and villages.

The transmission is easily the slickest of the three and the powertrain the most mature. Along with the unruffled chassis, the Ford offers good refinement for long journeys, thanks to that comfortable ride.

Testers’ notes: “An automatic gearbox is only available on the Active with the 99bhp EcoBoost engine. It costs £1,350 more than the manual and given how good that transmission is, we’d steer clear.” 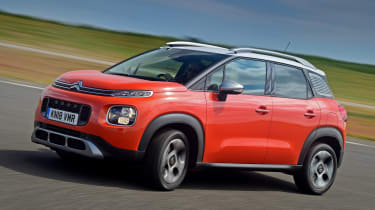 Citroen’s C3 Aircross replaced the old C4 Cactus as the French brand’s small crossover offering – and to great success. It’s our small SUV champ, and in £18,935 PureTech 130 Flair spec, as tested here, is one of the Fiesta Active’s main rivals.

The extra ground clearance and suspension travel in the Aircross are evident on the road, as is Citroen’s focus on comfort. The car tracks over rutted surfaces with a respectable level of composure, offering compliance over all but the worst bumps.

It’s better over rolling gradient changes rather than more jagged bumps, because it’s where Citroen’s comfort-focused approach comes into its own. The chassis is soft and therefore the car floats over the road, albeit lacking a little control as the speed rises. In fact, it’s a lot softer than the Ford, and because the Aircross stands taller than the Active, it rolls more. 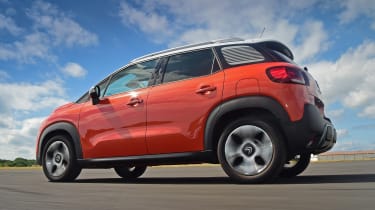 However, the damping doesn’t feel anywhere near as sophisticated as the Fiesta’s, and over cracks and crevices the Aircross’s suspension tends to thump; it can even throw the car off line in a corner.

It’s clearly not as good to drive as the Ford, and that extends to the powertrain. The engine is strong enough, delivering a fairly gutsy hit of torque thanks to its 230Nm output (the most here). This helped it sprint from 0-60mph in 10.4 seconds, four tenths ahead of the Tivoli, but 1.9 seconds behind the Ford.

The six-speed transmission’s shift is also crunchy and not as precise as the Fiesta’s, so although the C3 is lighter, it wasn’t as fast from 30 to 70mph through the gears. It took four tenths longer than the Ford, at 9.0 seconds.

In gear, the motor’s relatively gutsy slug of performance low down meant it was the quickest and most flexible model of the three. It beat both its rivals in every test we did between 30 and 50mph, as well as 50 to 70mph.

Testers’ notes: ��Flair trim gets a bi-tone roof as standard, which certainly lifts the look of the car given there’s no sign of Citroen’s trademark Airbumps. You can choose from white, black and orange.” 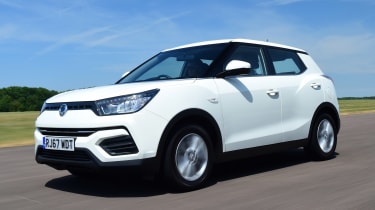 The Tivoli represented a significant step for SsangYong. The Korean brand broke into the mainstream with a much-improved product, which represents affordable family transport if you want a petrol SUV. It shows just how crowded this market is as well, so even though Ford has sales volume, it has a job on its hands to win business in this sector.

The damping doesn’t offer the control of either competitor, the Ford in particular. It’s lumpier and more unsettled, which means when driving on anything less than a smooth road it’s more unsettled from inside. Big bumps throw the body around as the suspension struggles to contain the energy.

While it impacts comfort, it also affects the grip on offer. The Tivoli isn’t as agile as the Fiesta; even at moderate speed there’s not as much bite from the front end, even when compared with the Citroen.

The steering is also on the slow side, and with the relative lack of grip next to the Ford, it means the SsangYong is the least rewarding car to drive. Yet while this isn’t the number one priority here, the Tivoli doesn’t have its rivals’ punch, either. 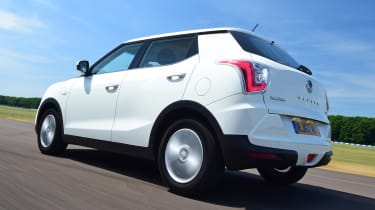 With no turbo to boost low-down performance, the engine needs working hard. It feels strained when you do push it, though, and is noisy. The box is okay – better than the Citroen’s, with a more mechanical feel – but isn’t quite as nice as the Ford’s due to its longer throw.

At our test track the numbers showed the Tivoli wasn’t as fast, taking 10.8 seconds to accelerate from 0-60mph. However, on the road the gap widens even further due to that lack of torque. The motor feels flat and even with the shortest gearing here, turning 2,900rpm at 70mph, the car took the longest to complete our in-gear performance assessments. It posted a time nearly twice as long as the Citroen’s for 50-70mph in sixth, at 16.1 seconds.

The Tivoli isn’t the most impressive machine from behind the wheel, then, but cars like these are about more than just driving dynamics and refinement. Can the SsangYong succeed when it comes to practicality?

Testers’ notes: “In a sector where connectivity is increasingly important, the relative lack of gadgetry for smartphones and tablets could count against the Tivoli. However, this is still an honest-feeling car.” 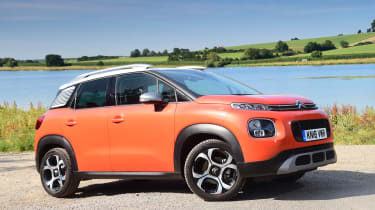 Practicality and affordability are two of the C3 Aircross’s key traits that see the Citroen take victory once again. The engine offers plenty of punch and therefore strong flexibility, even if the gearbox isn’t the greatest. However, it drives well enough, with space, tech and relative comfort combining here to make this our small crossover of choice in an incredibly crowded sector.

The Active has actually enhanced some of what the standard Fiesta offers. The ride is marginally better, yet it handles just as sweetly. It also serves up plenty of refinement, while the infotainment is top notch, too. But it’s not quite as practical as its competitors here and is pricier, although it’s still affordable on a PCP. And the brilliant driving experience edges it ahead of the Tivoli. 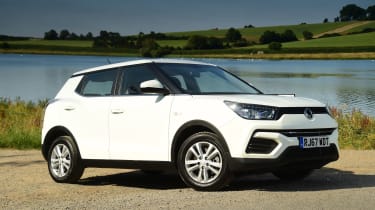 Even a few years after its launch, the Tivoli still represents great value and drives smartly enough. It’s short on ride comfort, refinement and handling prowess in this company, but it does deliver more practicality than the Ford. There’s a decent level of equipment, but overall quality isn’t on par with rivals, while the 1.6 petrol engine is also clearly a weak point. 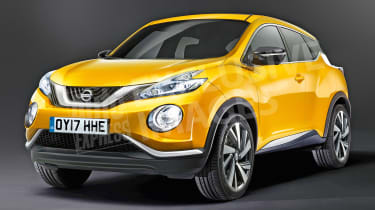 The car that kicked off the small crossover craze will be updated soon. Nissan will preview a new Juke later this year, offering style and substance to match the Fiesta. It needs more practicality as well.