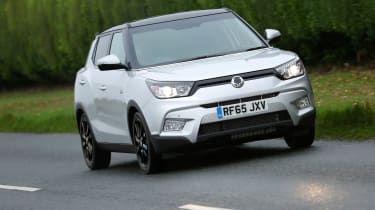 Four-wheel drive enhances the Tivoli’s appeal from a fashionable crossover to a useable mini SUV, and it does so for a very reasonable price. It’s certainly no class leader to drive, but it’s Ssangyong’s best road-biased car by a long stretch. The inefficient auto 'box is best avoided, however, and EX spec offers most of the kit you’ll need.

­For years SsangYong has been a bit-player in the UK market, mainly producing no-nonsense, rugged 4X4 workhorses in which refinement and driver appeal take a back seat.

The 2015 Tivoli, however, is built to be more a desirable and easy-to-drive on-road car, appealing to the same hugely popular lifestyle small crossover segment as the Nissan Juke and Suzuki Vitara. It’s an ambitious move that should boost Ssangyong’s appeal, but the Korean brand hasn’t forgotten its roots. The Tivoli is now available with ‘Torque on Demand’ four-wheel drive, and we’ve tried it in the UK for the first time.

It’s a relatively unique move in the small, fashionable crossover sector – Suzuki will sell you a diesel Vitara with four driven wheels and Nissan does have a 4x4 Juke, but only if you opt for the top-spec petrol model. It’s not just a case of bolting on a second driveshaft, though, as Ssangyong has fitted a new multi-link rear suspension setup to replace the torsion beam on the standard car. 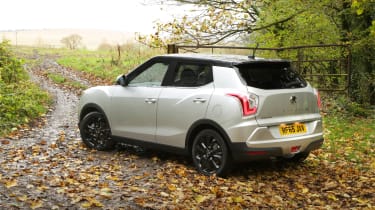 The fancier suspension doesn’t mean the Tivoli is a complete revelation – If you push on you might notice slightly improved body control and extra agility, but the standard car is adequate enough in the bends. Nor does it enhance the ride, which remains a bit too unsettled over rough roads and at low speeds.

What it does improve is traction in the wet. The two-wheel drive Tivoli (especially in torquier diesel form) can spin its front tires all too easily despite the modest power, but the 4WD keeps it in check and gives it a planted feel. As you’d expect, it also makes it a decent mud-plugger, as we sampled on Millbrook’s off-road course. The ground clearance is too low for any serious excursions, but it pulled itself along happily even on road tyres. It even gets a diff-lock mode that splits power 50:50 over both axles, which is something you’d normally only find on proper off-roaders. 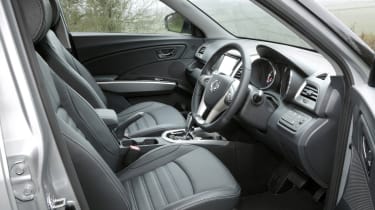 Our test Tivoli was also fitted with the six-speed automatic gearbox. The changes are smooth enough, but it has a tendency to kickdown too readily at lower speeds rather than use the noisy but gutsy diesel’s low-end grunt. It also seriously hampers efficiency (60.1mpg for the manual plays 47.9mpg for the auto), showing itself up as a rather outdated transmission.

The Tivoli 4X4 range starts from £17,100, but even with the addition of four-wheel drive and an autobox, our top-spec Tivoli ELX came in at under £20k. For that you also get heated leather seats, satnav, cruise control, parking sensors and keyless start, while the cabin is reasonably well put together and spacious enough for four adults. As with every Ssangyong, you also get a five-year unlimited mileage warranty, while a 1.5-tonne towing capacity is considerably better than most small crossover rivals.