Subaru WRX STi revealed at Detroit Motor Show, on sale here in the summer with prices to start at £28,995 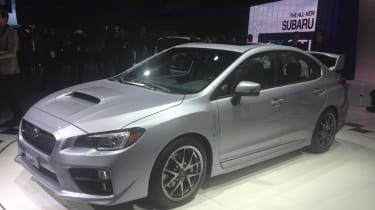 The Subaru WRX STi has been unveiled at the Detroit Motor Show 2014. The STi model is a faster version of the standard WRX that was first revealed in production form at the Tokyo Motor Show last November.

The WRX STi is set to enter the North American market in April 2014 first, with the car arriving in the UK in the summer, priced from £28,995.

Paul Tunnicliffe, Subaru UK Managing Director commented: “We wanted to acknowledge the following the WRX STi has, and while both the market and the Brand in the UK has changed in recent years, the WRX STi remains a demonstration of Subaru’s technical know-how.

“The new model will only be available in limited numbers when it goes on sale in summer nevertheless we were keen to give our performance car fans the opportunity to try it here for themselves.”

Subaru WRX STI is back. And yes it has gold wheels. It's like stepping back in time! https://t.co/cHOQUtbrhi

The standard WRX is powered by a 268bhp 2.0-litre four-cylinder direct injection boxer engine. It’s essentially a turbocharged version of the engine fitted to the BRZ, and the same fitted to the Subaru Forester Turbo.

However, as with its predecessor, the WRX STi uses a 301bhp 2.5-litre engine. The only transmission option is a six-speed manual. Symmetrical all-wheel drive is standard fit, too, which has three driving modes – Intelligent, Sport and Sport Sharp.

Power is normally split 41:59 front to rear by the centre differential. However, this can be altered by the driver by choosing one of six different presets.

The front and rear differentials are limited-slip affairs, to maximise traction, and the STI also gets torque vectoring by braking for the first time.

Other modifications include stiffer suspension with aluminium L-arms to reduce unsprung weight, uprated Brembo brakes and a faster steering rack. The STi has a ratio of 13:1 and 2.5-turns lock-to-lock, instead of the standard WRX’s 14.5:1 ratio and 2.8-turns lock-to-lock.

To ensure the WRX STi stands out from the rest of the range, it features more aggressive bumpers, 18-inch alloys, a big rear wing and a rear diffuser. Inside, there’s a flat-bottomed steering wheel, STi dials and sports seats.

Subaru has also shown the WRX STi in race-prepared form at the Tokyo Auto Salon in Japan. The car will be entered in the Nurburgring 24-hour race in June, where Subaru has achieved a number of class wins with previous Impreza-based models.

In a nod to the car’s rally history, 1,000 STi WRX Launch Edition models will be sold in North America. These will feature Subaru’s iconic WR Blue paint and BBS gold alloy wheels, plus a shorter gearshift action.