The Subaru WRX returns, but this time with a more upmarket feel 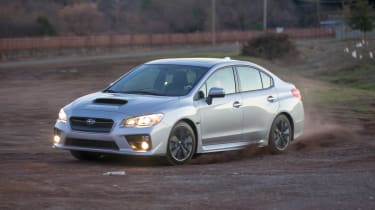 The Subaru WRX moves the game on from the old car – it’s more luxurious, better looking and more practical than before. It’s still a niche choice, but the WRX faithful will love the firm, grippy chassis and unique engine. The bonus is that it’s more sophisticated to drive, which should help broaden its appeal and justify its place in UK showrooms.

In December 2012, Subaru stopped selling the WRX in the UK. The strong Japanese yen had inflated prices, while the thirsty 2.5-litre engine and dated interior did the car no favours. But now there’s an all-new WRX, which hits dealers in the US in April, with sales in the UK likely thanks to improved economic conditions. So what has the new car got in store?

The WRX only comes as a four-door saloon – the bodystyle favoured by buyers in the major markets of North America and Australia. In a further concession to these regions, the car comes with the option of a CVT gearbox, although the new six-speed manual is the better choice.

We tried both gearboxes on roads that could double as rally stages – the environment the previous WRX was bred for. The CVT has eight pre-selected ratios you can flick between using the steering wheel-mounted paddles, but the auto gearbox can’t come close to the slick shifts of the six-speed.

The manual allows you to make more of the 2.0-litre direct-injected flat-four turbo, first seen in the UK with the new Forester. This engine still has a characterful warble under acceleration. It’s not as raucous as the old engine, but is a lot more vocal than the 2.0-litre turbo in the car’s obvious rival – the new Audi S3 saloon.

The Subaru’s meaty power delivery is complemented by a more advanced chassis. The four-wheel drive provides plenty of reassuring grip – some of our test route included ice-covered corners, but the WRX took these in its stride.

New for this model is a torque vectoring system, which increases the feeling of agility – the car responds quickly to inputs from the new smaller steering wheel.

Adjustable dampers aren’t available, and the set-up is on the firm side. Hardcore Subaru fans might put up with the brittle ride – as it gives handling on a par with our current hot hatch favourite, the two-wheel-drive Ford Focus ST – although the average driver could be put off.

The new WRX still has a bland interior, but it feels classier than before. The styling isn’t exactly handsome, yet it’s better than its brutish predecessor’s. It’s more practical, too, with six per cent more boot space, at 340 litres.

The new WRX is still a niche choice. But it does have a broader appeal than before, and it would be a shame if its UK fans didn’t get the chance to buy one here, especially if Subaru brings over the hotter STi next year.