Our verdict on the 335bhp Subaru WRX STi 340R, which aims to make the saloon a contender 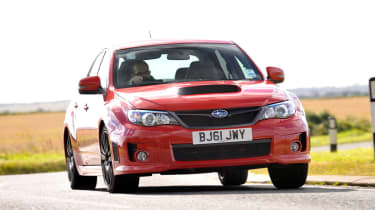 The latest WRX offers lots of power and four-wheel-drive agility at a price similar to less potent hot hatches, but lags behind when it comes to running costs and interior quality. Still, the potent new 340R is an exciting car which carries a great-value price tag for those who want something quick and old school.

Subaru has not only cut the price of its rally bred WRX STi, it’s also introduced a new power kit, called 340R. This lifts power from 296bhp to 335bhp and shaves half a second off the 0-62mph time.

The £1,599 kit can either be fitted to existing cars or specified on a new one. Go for the latter, and the STi carries a £28,594 price tag – you can’t buy a more powerful new car for the money.

Doors that sound tinny when shut and an old-fashioned cabin hold the 340R back, although it comes with lots of equipment for the money: Recaro sports seats, Bluetooth and cruise control are all standard. The trouble is, this car just doesn’t have the high-quality look or feel of rivals. The WRX (formerly Impreza) has been with us since 2008, and it feels it.

All might be forgiven when you drive it. The 340R upgrade ensures explosive performance, with quicker acceleration than the standard car. You’ll have to negotiate the turbo lag, with very little torque below 3,000rpm, but a slick gearbox makes working the engine satisfying, and you’re rewarded with a rally car sound.

The STi handles well, too. The steering is too light, but a range of modes for the traction control, powertrain and mechanical differential means you can alter the car’s reactions to your heart’s content. Subaru’s famed four-wheel drive ensures the power is delivered effectively.

It’s a proper performance car for hot hatch money. But while the likes of the Renaultsport Megane 265 and BMW M135i trail on power, they’re just as much fun and cost less to run.