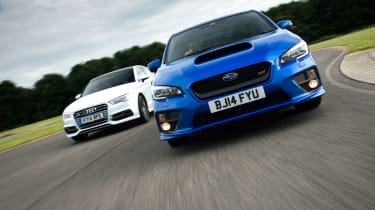 The performance saloon market, which was so strong in the nineties, is undergoing something of a resurgence. For starters, a legend has returned to the class in the shape of the Subaru WRX STi.

The raw, rally-bred four-door disappeared from British showrooms a few years ago, but now it’s back – and the brand plans to recapture its glory days.

Audi has taken a slightly different approach to its sleek S3 Saloon, ignoring the wild wings and bulging bodywork of the WRX STi in favour of a more low-key, executive express approach.

Yet under the skin it boasts the same 296bhp power output as the Subaru, as well as a sophisticated all-wheel-drive transmission. Choosing the Audi means paying a £4,250 premium – but is it a better buy? Or is the new WRX STi the car Subaru fans have been waiting for?

For many people the WRX is Subaru. The badge stands for World Rally eXperimental, and these models are the wild, roadgoing cousins of the famous blue and gold rally cars that transformed the image of the brand from a maker of utilitarian workhorses into a company synonymous with performance and handling.

However, the last factory-backed Subaru rally cars exited the World Rally Championship at the end of 2008, and in recent years the WRX’s star has waned. The car still has a loyal following, though – and now it’s back in UK showrooms.

Which of these sports saloons is the best? Click the links above for full reviews, and read on to find out the full verdict.

Subaru and Audi have different approaches to the styling of their performance models. So while the S3 has a subtle platinum grille and mirrors, the WRX features a huge rear wing and bonnet vent, which attract lots of attention. Subaru fans wouldn’t accept anything less, and you can even add £960 gold wheels for the full ‘555’ rally car look. However, it’s a bit full-on and Audi’s styling has broader appeal. 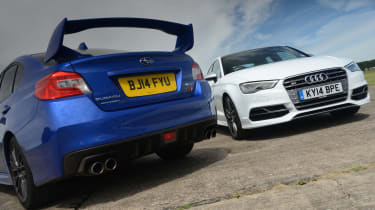 The S3 comes with Audi’s familiar Drive Select set-up, which allows owners to fine-tune the throttle, steering and dampers. Subaru’s SI-Drive controller allows you to adjust the throttle response, while a separate switch is provided for controlling the aggressiveness of the centre differential. 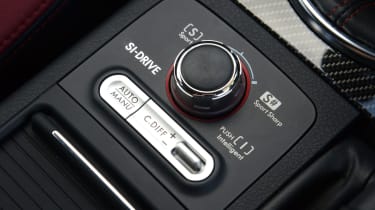 The Subaru has 70 litres more luggage space than the Audi, at 460 litres. The boot floor is 100cm long with the seats in place and 176cm with them folded – 6cm and 4cm up on the S3 respectively. With a 107cm load height, there’s 7cm more clearance under the boot lid than in the Audi. 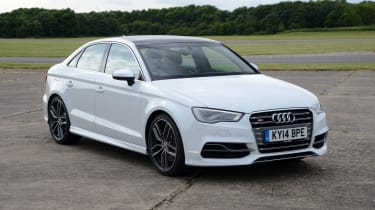 The Audi S3 Saloon takes a clear win here. It looks a little expensive in this company, but the initial outlay in the showroom will soon be offset by lower running costs and stronger residual values. It’s faster, cleaner and more comfortable than the Subaru, while composed handling and a punchy powerplant are matched to a first-class cabin, excellent refinement and stylish looks. 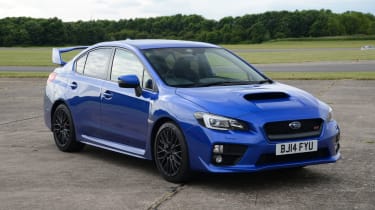 There’s a lot for Subaru fans to like about the new WRX STi, with levels of grip you won’t find in many machines this side of a supercar, as well as a characterful engine note. However, the engine is nowhere near as efficient or flexible as the Audi’s, while the dated cabin, firm ride and aggressive styling are an acquired taste. Still, the small numbers being sold here are likely to be snapped up by diehard fans.