The Subaru WRX STI has been updated, and we've been for an early drive in Japan 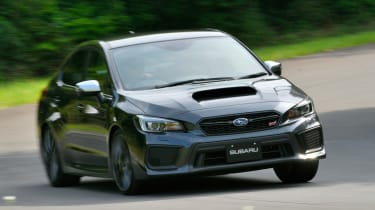 Despite offering no extra power or torque, the combination of the newly fitted six-piston Brembo brakes and a revised centre differential makes this STI the best handling yet. The changes allow the driver to brake later, hold a tighter line, and carry more speed through corners – all while feeling snug in the body-hugging bespoke Recaro seats. It’s no BMW 3 Series, but there will be few complaints among diehard Subaru fans.

Buy a set of monoblock six-piston Brembo brakes and get a facelifted WRX STI included in the price. All jokes aside, that’s what Subaru is suggesting with its revised flagship sports saloon – and we’ve been for an early drive in Japan.

While the changes haven’t been confirmed for the UK, the tweaks should be made available to Brit buyers before the end of the year. The car we drove used a Japan-specific 2.0-litre turbo, but it’s expected that European models will retain the outgoing car’s tried and tested 2.5-litre Boxer engine.

As one Subaru engineer said, “It’s the cheapest car on the planet with six-pot Brembo brakes” – offering just the kind of modification needed to inject some passion back into the brand’s waning popularity. It should do just enough to excite the diehard fans, too, who look to Subaru for ultimate bang for their buck. 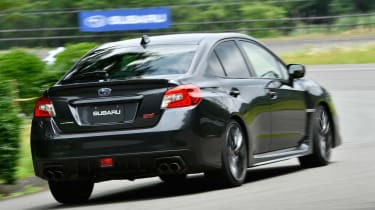 With the facelifted 2018 WRX STI, Subaru is giving its customers what they’ve been crying out for – namely beefier brakes and even sharper handling. During our brief sprint around the mountainous Ise Cycle Sports Centre south of Tokyo, we were able to drive the current and revised models back to back, and the result was more startling than you might imagine.

Gone are the signature STI gold rims with red four-piston Brembo brakes, replaced by new black 19-inch wheels and bright yellow six-piston callipers with bigger drilled rotors. Apparently, American buyers in particular had complained about the insufficient stopping power and brake fade, though all markets should benefit from the upgrades in the not too distant future.

“Some owners said their brakes would only last a couple of laps during track days, so we needed to fix that issue,” said one engineer. “Now the brakes will last a whole 30-minute track session and with almost no brake fade.”

To to put the new brakes to the test, we tried both old and new on a high speed straight that leads into a set of tight corners. As expected, the new setup allowed us to brake far later than the existing items, and without drama. The revised Brembos wiped speed off far quicker, while also letting the car stay flatter with less nose dive. And even after two hot laps and some heavy braking trials, the new brakes showed no fade while the four-pots exhibited sponginess after just a handful of quick corners. 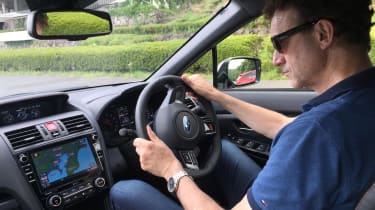 Disappointingly, however, there’s no extra power or torque. That means the saloon gets the same 2.0-litre turbocharged Boxer engine in Japan, and an identical (larger) 2.5-litre unit here in the UK. The STI retains the current model’s six-speed manual gearbox and four-wheel drive system. Despite the increased capacity, the 2.5 is slightly (296bhp and 407Nm plays 300bhp and 422Nm) down on its Japanese equivalent.

Subaru claims a 0-60mph dash of 5.0 seconds flat, which is on par with the UK car’s time. And as long as you keep the revs (and turbo) spinning above 3,500rpm, you can avoid the noticeable lag and access peak boost whenever necessary.

One other significant upgrade to the facelifted STI is in its Multi-mode Driver Control Centre Differential (DCCD) all-wheel-drive system. This revised setup has been made fully electronic this time round, a modification that makes the car’s reaction times quicker to driver input. It is now able to distribute torque faster, too, with a 41 per cent/59 per cent front/rear split.

It lets you turn in that little bit sharper and get back on the throttle even earlier, while also reducing sideways tyre slip and improving overall grip. Minor revisions to suspension spring rates and damper settings have also helped boost handling. The ride is still hard, but the revisions have given the STI more compliance and made it easier to live with day to day. 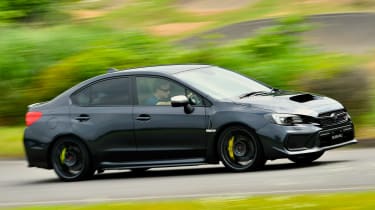 In addition to the new black rims and yellow brake callipers, Subaru has removed the bench-sized rear spoiler – relegating it to the options list. It’s unclear whether this will apply to UK cars, but it’s a nice deletion for those less keen on shouting about their car’s boisterous character.

Inside, the STI gets specially designed, body-hugging Recaro seats and a larger eight-inch sat-nav screen. Quality can’t match rivals from BMW or Mercedes, but it’s functional enough and benefits from big, solid-feeling buttons to control the infotainment and climate control. The dials are easy to read, with a central TFT display showing everything from fuel economy to trip infomation.