Subaru BRZ facelifted with new suspension and engine parts for 2017

2017 BRZ gets a mild redesign, and will go on sale in spring

At the front the new Subaru BRZ gets a revised front bumper, making the car appear slightly lower and wider. Full-LED headlights top off the refreshed face, but it’s not as big a facelift as the one coming on the BRZ’s sister car, the Toyota GT86.

Around the back the taillights get a slight redesign with a different light signature, and there’s a new rear wing on the boot lid. Ten spoke alloy wheels are also a part of the redesign.

Inside, just like the facelifted GT86, the new BRZ gets a 4.2-inch LCD mutil-function display embedded in the instrument panel, introducing a G force meter, a lap timer and a handful of other sporty benchmarking tools. The steering wheel has been shrunk and redesigned, and Subaru has finished the cabin in higher quality Alcantara and leather.

Alongside the cosmetic changes, the new BRZ also benefits from drivetrain and chassis revisions. Under the bonnet, the 2.0-litre flat four gets new cylinder blocks, a new camshaft and lighter rocker arms. 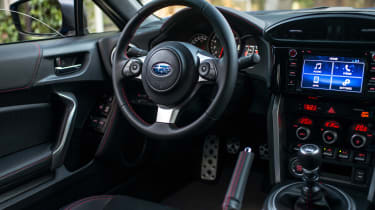 The engine updates aren’t a power upgrade – the BRZ still produces 197bhp, and Subaru tells us the changes are more about refining the driving experience and fuel economy.

Rounding off the changes are redesigned dampers, tweaked to reduce body roll and damping vibration, a new ‘TRACK’ mode on the VDC selector, a new hill-start assist setup, plus new airbags.

The revised BRZ will go on sale in spring 2017, and while Subaru hasn’t confirmed prices, the new model will be available in SE Lux trim line only, which is currently priced at £23,995 with a manual gearbox.

Read our review of the Subaru BRZ here.