Can the range-topping Impreza STI win over performance fans? 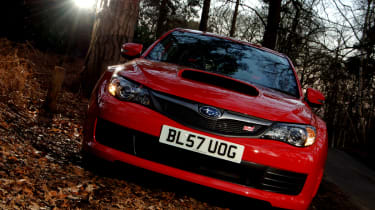 The latest STI shows the all-new Impreza in its best light. Its dramatic styling tweaks transform the standard car’s humdrum design, while the turbocharged engine and four-wheel-drive handling deliver impressive cross-country pace. The flagship is well equipped and, at £24,995, it’s £1,600 less than the car it replaces. But the STI faces stiff competition, while its running costs and look-at-me styling won’t appeal to everyone.

Subaru's Impreza WRX STI is here at last. And the crucial question is: can it succeed where less powerful versions have stumbled?

The flagship model gets off to a strong start because it really looks the part. Where lesser versions of the car appear drab and anonymous, the STI is transformed by wheelarches so flared they give a cartoon-like feel.

These modifications add 55mm to the width of the body, and provide the whole car with an incredibly powerful stance. This is emphasised by details such as the new mesh grille, gaping bonnet scoop and revised front bumper. Meanwhile, from behind, you can identify the range-topper by its over-sized roof spoiler, quad exhaust tailpipes and diffuser-style bumper.

Changes to the cabin are minor in comparison – which is disappointing, as both the design and materials are a letdown. Even the STI’s steering wheel looks cheap. Only the backlit instruments add any drama.

However, Alcantara-trimmed sports seats hold driver and front passenger firmly in position, and the gearlever shows there are six ratios to play with – one more than in the standard WRX variant. Gadgets include controls for the adjustable centre differential, along with Subaru’s SI-Drive system, which provides three throttle settings.

Turn the key, and the turbocharged flat-four engine is rather subdued – which isn’t what we had hoped for. While the 2.5-litre powerplant produces a healthy 296bhp, its distinctive soundtrack is barely audible at idle.

Still, the STI is at its best out on the road; keep the revs high, and it comes alive. Gearshifts have a precise, mech-anical feel, and the Brembo brakes are strong and progressive. They need to be: Subaru claims the newcomer can cover 0-62mph in 4.8 seconds.

Few drivers will be able to match that figure, but the Impreza is certainly swift. Traction is great as well, even if the steering is still too light and doesn’t inspire confidence any more than it did in the STI’s predecessor.

The handling balance has shifted, and some of the razor-sharp responses have been traded for an improved ride. Few cars with this much performance are as comfortable, yet the STI is still fun to drive – and that alone will be enough to satisfy Subaru fans that it’s been worth the wait.